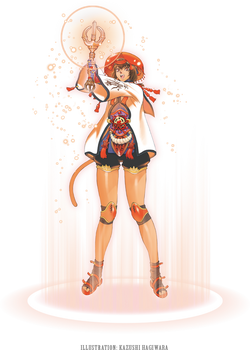 These arcane spellcasters harness the power of geomancy to strengthen allies, enervate enemies, and provide much-needed support to their parties. They assume many of the same support specialist roles corsairs and bards do, and while they may not pack as much offensive firepower as black mages, they can employ elemental magic with ease.

Geomancer is one of the jobs released in the expansion Final Fantasy XI: Seekers of Adoulin.

Using their bells, Geomancers command the power of geomancy in the form of elemental attack magic and special magical fields called colures—emanations that emanate from a point and bolster allies or enfeeble enemies within their radius of effect. Indi-colures emanate from the body of the Geomancer him/herself, while Geo-colures emanate from special objects called luopans.

The quest to become a Geomancer is undertaken at Western Adoulin. The player must speak with Sylvie to begin the quest "Dances With Luopans." While signing up, they will asked to retrieve a fistful of homeland soil and a petrified log. They must then find an Ergon Locus and there gather enough lifestream to warm their luopan.

Geomancer is too new to have a set of agreed-upon standard subjobs yet. However some jobs would seem to have characteristics that might recommend them as such.

Official preview art of a Galka Geomancer in artifact gear. 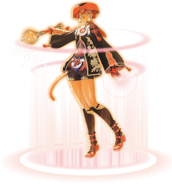 Concept artwork of a Mithra Geomancer. 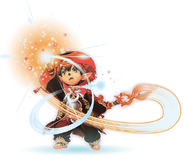 Concept artwork of the Idris club and an unknown club.

Its Japanese name, Fūsui or Fūsuishi (風水士), refers to the Chinese feng shui. [view · edit · purge]Feng shui is the Chinese studying of the direction, geography and/or weather to calculate the individual's fortune who resides or works in that place. Bells are used in the craft as instruments to dispel negative energy and stimulate positive energy.