Harnessing the power of their surroundings, they easily avoid pits and floors with damaging effects

The Geomancer is a job in Final Fantasy V given to the player after the Fire Crystal shatters. Geomancers focus on manipulating the terrain to do various randomized attacks against the enemies. Geomancers have low stats and limited equipment selection, but it is the only job outside of Freelancers that can equip bells.

Geomancer's Gaia ability has various effects based on what terrain the party is in. It is a mildly useful ability, but not the main draw of the job. The job's main benefits are in its support abilities, namely Find Pits and Light Step, that can avoid dangerous terrain in some dungeons, as well as the ease at which it is mastered. Mastering the job grants these abilities to Freelancers and Mimes by default.

Mastering Geomancer on the party in the now defunct mobile and Steam versions earns the achievement "Child of the Earth".

The Geomancer dresses in cold weather gear, complete with warm hats. The look is fairly uniform, though Galuf's and Lenna's outfits feature striped pants and Krile has yellow stars on her costume. The main colors are blue and green, although Lenna and Krile also wear pink.

Geomancers have no stat penalties, and instead have small boosts in all except Magic, where they have a larger boost. This means that their physical damage, turn rate, and HP are barely above those of a regular Freelancer, but their spellcasting capabilities are more potent.

Upon mastery, Freelancers and Mimes gain the Geomancer's base stats unless they already have a higher base from another mastered job. As Geomancers are so quick to master, this can be an easy way to gain a boost to the Magic stat for Mimes. Geomancers require very low AP to master; it is possible to master the job in one battle if it is against the Mover formation in the Interdimensional Rift.

Geomancers have limited equipment access, but are unique in being able to equip bells. Aside from these, they mainly equip mage gear, in the form of knives, magic hats, robes, and armlets.

The Diamond Bell and the Tinklebell deal damage based on the user's Agility and Magic, the target's Magic Defense, and will randomly deal anywhere between 100% to 150% of its listed damage for the GBA version, or between 50% to 100% for the SNES version. The Gaia Bell and the Rune Bell use the Axe damage formula. Bells deal full damage from back row.

The ultimate magical headgear the Geomancer can wear in most versions is Circlet, bought from the Phantom Village. The superior Royal Crown is available from the Sealed Temple in the Game Boy Advance version. The best robes in most versions are the White and Black Robes, bought from the Phantom Village, though the Game Boy Advance version added the superior Robe of Lords.

The Gaia command is useful, especially in the hands of a spellcaster. It has a random effect based on the current location's environment and the caster's level. The effects vary from something as simple as dealing minor damage to inflicting instant death. Gaia is based on the user's Magic stat and costs no MP, so it is a cheap alternative to casting spells. Geomancer and their Gaia skillset is useful against the Skull Eater.

Find Pits reveals trap doors, but only if the user is about to step on one, while Light Step lets the user walk over harmful surfaces, like lava.

Since Bartz has a new moveset based on the classes in Final Fantasy V, he now has a move based on the Geomancer job. Geomancer is an HP attack that has two variants: A ground attack (Earthquake) and an aerial attack (Wind Slash).

Earthquake is cast when Bartz is on the ground and targets one person. He has a piece of rock raise from the ground, which also has a good chance of hitting an airborne opponent. Wind Slash is a slow-moving projectile that Bartz can cast while airborne and tracks down the targeted opponent.

When Bartz masters Geomancer after hitting opponents with the move three times, Geomancer has changed properties, which includes Earthquake being cast faster and two Wind Slash projectiles being summoned at the same time. 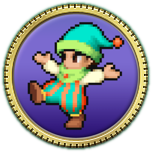 Its Japanese name, Fūsui or Fūsuishi (風水士), refers to the Chinese feng shui. [view · edit · purge]Feng shui is the Chinese studying of the direction, geography and/or weather to calculate the individual's fortune who resides or works in that place. Bells are used in the craft as instruments to dispel negative energy and stimulate positive energy. This is why Geomancers equip bells as weapons.