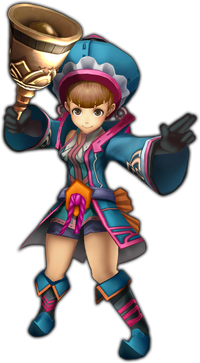 The Rune Strike, a special ability of Geomancers, takes time to charge, but raises their magic power with each hit.

The Geomancer is unlocked in the 3★ Quest, "Aptitude Exam: Geomancer, Alchemist". It can be mastered by completing any 10 quests, then the 5★ quest "Mastery Trials: Geomancer".

The Geomancer is an adept booster that uses debilitating traps. Geomancers can initially equip bells and clubs; after mastery dual bells, dual clubs, dual daggers and dual firearms can be equipped.

They are proficient in all Club Skills.

The unique ability Trap places a proximity trap that deals damage and can stop enemies. Trap deals physical and magical damage. The standard ability Terrain Bonus gives one of many bonuses depending on the ground beneath.