Genji Gloves (げんじのこて? or 源氏の小手, Genji no Kote?, lit. Genji Glove), also known as Genji, Samurai, Genji Armlet, and Ninja, is a recurring piece of equipment in the series. It is a powerful armor or accessory, depending on the game, and is often obtained by stealing from or defeating Gilgamesh. It is part of Genji equipment.

Genji Gloves is a high-ranked glove that provides 9 Defense, 13 Evade, 2 Weight, and immunity to Poison and Stone. It can be obtained in the Game Boy Advance and later releases from defeating Gilgamesh, and can be equipped by the Warrior, Knight, and Ninja classes.

Genji Gloves is the strongest non-character specific arms armor, providing 45 Defense, -47% Evasion, 10% Magic Defense, and -100 Int/Spr. It can be found in Pandaemonium or Arubboth or dropped by White Dragon, Iron Giant, and Steel Giant.

Genji Gloves is a high-ranked gauntlet found in the Cave of Shadows, equipped by the Onion Knight, Freelancer, Dark Knight, and Ninja classes.

In the 3D version, it provides 20 Defense, 14 Magic Defense, +4 Strength and Agility, and immunity to Confusion, Petrify, Poison, Toad, Sleep, and Gradual Petrify.

In the NES version, it provides 9 Defense, 7 Magic Defense, and 15% Evade.

Gloves used in a faraway land.

Genji Gloves is a high-ranked gauntlet that provides 8 Defense, 5 Magic Defense, -10 Evasion, and 3 Magic Evasion. It can be found in Lair of the Father, and is equipped to Kain after the Giant of Babil. It can be equipped by Cecil, Kain, Cid, and Edge. In the 3D remakes, the -10 Evasion has been removed.

Genji Gloves is a high-ranked gauntlet, providing provides 8 Defense, 5 Magic Defense, and -10 Evasion. It can be found at Subterrane, and can be equipped by Cecil, Kain, Cid, Edge, Ceodore, Luca, Gekkou, Tsukinowa, Izayoi, Zangetsu, and Golbez.

Gloves that prevent toad and paralysis.

Genji Gloves is an accessory that provides 12 Defense, 1 Magic Defense, 6 Weight, and immunity to Toad and Paralyze. It can be stolen from Gilgamesh during the battle at Xezat's Fleet.

Genji Glove is a relic that provides +5 Defense as well as allows the user to wield two weapons at once. It can be found in the Returner Hideout, Cave to the Sealed Gate, and Dreamscape, stolen from Dragon and Gilgamesh, and metamorphed from Samurai and Yojimbo. It can be equipped by everyone except Umaro.

Genji Glove is an accessory that provides Break Damage Limit, allowing Zack to hit for upwards to 99,999 damage, in addition to having Auto-Critical, allowing Zack to critical all the time. It is found in a chest in mission 9-6-4.

Genji Gloves is a high-ranked gauntlet that provides 27 Defense, 17 Magic Defense, +2 Magic, and teaches the support ability High Tide. It can be found using a Dead Pepper at the foaming water at the southern tip of the Forgotten Continent and stolen from Lich. It can be equipped by Steiner and Freya.

Genji Armlet is an armor for Kimahri, obtained when the dominant ability on any armlet is Break HP Limit.

In the original version, Genji Gloves is an accessory that requires the Genji Armor license to equip, and provides +2 Magick as well as improves the chance of scoring a multiple hits equal to [Speed x 1.8]%. It can be stolen from Gilgamesh during the first encounter after he has switched weapons three times.

In the Zodiac versions, Genji Gloves now also adds +3 to Magick and can also be obtained through the Hunt Club and stolen from Judge Bergan in Trial Mode Stage 100. In the Zodiac Age version, the player may only transfer items obtained in Trial Mode up to Stage 99, as there's no auto-save needed for the transfer back to main game after clearing Stage 100.

Genji Glove is an accessory that provides Uncapped Damage. It is a reward for missions 51, 62 and 63. If dismantled at max level, it yields a Trapezohedron.

Genji Glove is an accessory that gives the ability Resist Damage +12%, the synthesis ability Warrior Wisdom/Warrior Spirit, and has a Capacity of 70. It can be bought from Chocolina (after patching to latest version) for 10,000 gil, Dark Matter x1, and Scarletite x2. It sells for 5,000 gil.

Delicate Genji Glove is an accessory that gives the ability Resist Damage +6%, the synthesis ability Warrior Wisdom/Warrior Spirit, and has a Capacity of 30. It can be bought from Chocolina (after patching to latest version) for 5,000 gil, Genji Glove x1, Succulent Fruit x10, and Malodorous Fruit x5. It sells for 2,500 gil.

A vermillion glove made by a foreign craftsman.

Genji Glove is an accessory that provides +2 Physical and Magick Attack, which can only be stolen from Elmdore (PlayStation version) or from Rendezvous mode (PSP or later only).

These colorful armlets are beautifully adorned.

Genji Armlets is an accessory that provides 5 Attack, 10 Defense, 2 Magic, and 5 Magic Resistance.

Genji Gloves is an accessory that provides 10 Defense, 3 Magic, and 5 Resistance. It can be obtained from the Bazaar from the "Exotic Armor C" set.

A Genji Glove is worn by Locke Cole on his right hand in his default attire, and alludes to Final Fantasy VI in which a character can wield two different weapons when the accessory is equipped, explaining how Locke dual-wields daggers in battle.

The Ninja has a gauntlet icon before its name. It can be bought in the first floor of the Tower. It has 15 Defense and increase Agility by 10.

The Giant has a gauntlet icon before its name. It can be bought in Final Town for 18000 GP or found in Edo Castle. It gives 10 to defense, add 117 HP to Robots, and increases their Def by 26. It also gives Weapon resistance.

The Samurai has a glove icon before its name. It provides a defense of 9, magic defense of 11, and grants resistance to Petri. It can be bought in Cirrus in Pureland for 18000 GP.

A glove from the Farplane. When equipped it boosts ATK and MAG, and also enables dual wield. According to various tales, it was passed down through the legendary Genji family. Though other items exist bearing the Genji name, they are scattered all over the place, and it would be quite a task to collect them all.

Gloves once passed down in the Genji clan of samurai from the Land of Wa, a mysterious island nation that vanished centuries ago. It is said they were worn by a tragic hero who racked up countless victories only to be killed as a traitor by his elder brother.

In Bravely Default, Genji Gloves is an accessory that provides +9 M.DEF and +2 M.DEF. It can be found in Mythril Mines (blue chest) and Dimension's Hasp, or dropped from Alternis Dim.

In Bravely Second: End Layer, Genji Gloves is an accessory that increase P.DEF by 9 and M.DEF by 2. It can be found in Via Celestio. 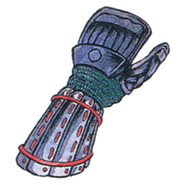