Even if the morrow is barren of promises, nothing shall forestall my return. To become the dew that quenches the land, to spare the sands, the seas, the skies, I offer thee this silent sacrifice.

Genesis Avatar is a boss in Crisis Core -Final Fantasy VII-. He is fought in Banora Underground as part of the final battles.

Genesis Avatar cannot be damaged by physical attacks due to being out of most attacks' range, but he can be damaged by certain magic attacks, such as Flare or Ultima. When he lowers his sword, Zack can attack the Materia on it as well. Genesis Avatar will summon G Shadow Scythe enemies, each with their own weapons and abilities, to distract Zack from attacking the Materia.

Genesis Avatar will summon Materia from the Lifestream floor and cast few magical spells, such as Flare or Firaga. He will attack with Purgatorial Wave, which will cause tremendous damage and is unavoidable. When Genesis Avatar withdraws the sword from the ground, he will attempt to attack with a spell that can be blocked or dodged. When Genesis Avatar strikes the ground with his sword many Genesis Copies will spawn and use offensive abilities, such as Drain, Firaga and Blizzaga. The Genesis Copies will spawn multiple times and can become overwhelming.

The physical attacking G Shadow Knights are easy to defeat, but the magic using G Shadow Mages will be a little more trouble if all the player depends on are physical attacks. One should be sure to have a mastered spell Materia or two (such as Blizzaga or Firaga) to defeat them. Wall and Regen should be active when the battle begins, or high Vitality/Spirit and a mastered Curaga will be a great help.

Genesis Avatar's Flare and Firaga spells are easy to avoid. Having the Raise status active is useful.

This battle will take a long time, but is not as challenging as it appears. The hardest part is knowing what to hit, when, and for how long. The HP of the Materia in the sword Genesis strikes in the ground is unknown for a certain period of time. All that is needed is to keep hitting it as much as possible. Eventually the Materia's HP does become available for viewing (if Libra is equipped).

When Genesis Avatar withdraws the sword from the ground, he will attempt to attack with a spell that can be blocked or dodged, but the only ability that needs to be kept in mind is the Purgatorial Wave. It is recommended to kill the enemies Genesis Avatar spawns as soon as possible. When the Genesis Copies are gone the player should proceed to attack the Avatar.

Another option is to get the Costly Punch Materia by fusing any Punch Materia with any DMW-boosting Independent Materia. Costly Punch will do 99,999 damage if Break Damage Limit is equipped and Zack's HP is not broken. With this, the battle can be ended quickly with several hits to Genesis Avatar's sword. 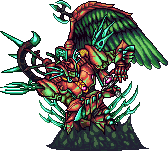 Genesis Avatar's sword with the Materia.

Genesis Avatar's sword with the Materia.

Shadow Flare.
Add a photo to this gallery

Retrieved from "https://finalfantasy.fandom.com/wiki/Genesis_Avatar?oldid=3281959"
Community content is available under CC-BY-SA unless otherwise noted.