Bottom of the Sea

The Sunken Gelnika, or Crashed Gelnika, is an optional location in Final Fantasy VII. It lies on the Bottom of the Sea to the south of Costa del Sol. The plane can only be accessed after the player has acquired the submarine from the Junon Underwater Reactor. The Gelnika holds some of the game's most difficult enemies, and also some of its best treasures. It can be visited at any time after obtaining the Shinra Sub in Part 2 or Part 3, however, normally if it is visited after the events of Midgar at the end of Part 2, the boss battle will not take place.

The Gelnika (ゲルニカ, Gerunika?), referred to as the Guernica in the Yen Press On the Way to a Smile translation, is a type of vehicle from the Final Fantasy VII series. It is a Shinra transport plane. Prior to being launched, a Gelnika can be seen at the airport in Junon.

A Gelnika bombs Banora village after Zack Fair and Tseng discover its apple juice factory has been taken over by Genesis Rhapsodos, and that the village is deserted. Shinra orders the town destroyed to eliminate all evidence.

Gelnika type planes are held in Junon. During Shinra's plan to ram the Huge Materia into Meteor, a Gelnika is used to transport the Huge Materia to Rocket Town. A Gelnika is also used to transport weapons and genetically engineered monsters designed to kill Sephiroth and is shot down by a Weapon, and crashes into the ocean. Even after sinking to the ocean floor, the plane's interior keeps from flooding, allowing for one to enter the sunken aircraft from the ocean. With the genetically engineered monsters now on the loose, the Gelnika still proves dangerous.

After stealing a submarine, Cloud and his group enter the Gelnika and find Reno and Rude of the Turks who are there to recover the weapons and materia. Cloud and his party defeat them and they retreat. 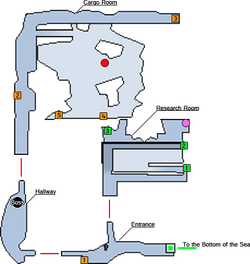 The entrance is entered from the Bottom of the Sea world map. A ladder descends into the Gelnika. At the top of the screen is a door leading to the Research Room. A save point sits next to this door. On the far-left is a door leading to a second Hallway. By this door is a chest containing the Heaven's Cloud weapon. There are no encounters fought in this room.

Can be entered from the Entrance through a door at the bottom of the screen on the right hand side. At the top of the screen is a door that leads to the Cargo Room. If the player comes here before venturing to Midgar before the end of Part 2, Reno and Rude can be found here and a boss battle will occur. If the player skips the battle with the Turks bypassing the walkmesh line to trigger the scripted scene from playing out during the return to Midgar segment, the Turks will still appear in the Gelnika in Part 3.

The Research Room can be entered from a door from the south which links it to the Entrance. Straight ahead by the left wall is a slope that leads up to a raised platform. At the end of this is a chest containing a Megalixir. Heading right from the entrance will lead to a box containing the Escort Guard armor.

Every enemy except the Turks in the sunken Gelnika can be morphed into stat plus items, allowing the player to max out every stat. Appropriately enough, Yuffie's ultimate weapon, the Conformer, which can morph enemies while dealing 100% damage instead of 10%, is also found on the sunken Gelnika.

If the player is too weak to survive, obtaining Knights of the Round and pairing it with a Sneak Attack Materia may make the area more hospitable. As Sunken Gelnika is accessible before the W-Item Materia, which can be used for the W-Item duplication bug, it is advisable to buy Tents and stay near the door to the room with the save point, as no enemies are encountered there. Since Unknown yield a lot of gil, it is easy to buy a lot of Tents, but as sunken Gelnika has no shop, players have to leave to go to the nearby Corel to buy Tents if they run out.

There are no random battles in the entrance room.

"Under the Rotting Pizza"

"Under the Rotting Pizza" plays in the ruins of the Gelnika.

Occasionally, Emerald Weapon will appear just in front of the plane, forcing players to go around it or surface if they want to avoid fighting it. It is possible to collide with the Weapon at such an angle that the submarine will fly right into the Gelnika, triggering the player's entrance to it rather than a battle with the Weapon.

The "Unknown" enemies allude to the enemies found in the Great Sea Trench in Final Fantasy V, all of which were called Unknown and defied description. 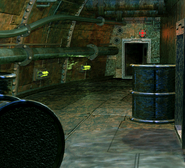 A Gelnika in an FMV.

Gelnika may be a mistranslation of "Guernica". [view · edit · purge]Guernica (official and Basque name Gernika) is a Spanish town that in 1937 was the site of Nazi Germany's first aerial bombings.

In Final Fantasy VII Remake, the weapon shop vendor at Wall Market utters "The Shinra Relnikha... Oh what I wouldn't give to have that." This may refer to the Gelnika.