Akira Oguro
Gekkou is the stalwart leader of the Eblan Four in Final Fantasy IV: The After Years. He is a warmhearted, honorable man of few words.

Gekkou is a muscular ninja, wearing a red scarf with a black garb. He wears a steel band around his head and goes barefoot. Gekkou takes the guise of a monk during the ending credits, but never used it while undercover in Fabul.

Gekkou is loyal to Edge, especially his advice to survive, no matter what happens. He agrees with the Mysterious Girl, because her philosophy agrees with Edge's advice. She claims that honor is not something to die for just to get revenge, making Gekkou value his life more than giving it up after seeing Fabulian monks die to avenge their dead brothers killed by her.

Gekkou is one of the people Edge talks to before heading to the Cave of Eblan. He guards the entrance to Eblan.[note 1]

When Eblan receives word of Baron stealing Crystals from the other nations, the Eblan Four become eager to assist Edge, and they are sent on missions to gather information. Gekkou travels to Fabul to investigate the impact crater of a meteorite that crashed near Mt. Hobs. At the base he sees a mysterious person engaging with the monks from Fabul, quickly defeating them. Gekkou ponders if he could save the monks, but, remembering his master's orders, regretfully retreats to bring the intel he has gathered, and buries the monks.

He reunites with Edge and the other Eblan Four within the Tower of Babil. After being forced to escape from the Mysterious Girl and Ifrit, they fall to the Underworld and into the Falcon.

In the Gathering Tale, Gekkou watches over Yang, Ursula, and the other incapacitated people below the Falcon's deck. After the Creator has been felled, Gekkou overlooks Ursula's training. Gekkou and the other Ninja Guard of Eblan renew their vows of loyalty to Edge awaiting for their next mission.

Gekkou has high HP, Strength and Stamina, surpassing many other fighters, but has low MP and Speed. His statistics and equipment make him comparable to Cid and Luca, though with better individual abilities and less versatility when it comes to armor and Bands.

Gekkou cannot dual wield weapons. His special ability, besides Ninjutsu, is Shuriken, a less versatile form of Throw. Gekkou can perform Band abilities with the other Eblan ninjas, as well as Yang due to his time undercover in Fabul.

Gekkou can equip the the same equipment as Edge, with the addition of axes and hammers instead of claws. Because he cannot dual wield, it is usually best to keep him equipped with an axe or hammer.

Gekkou starts with a Kodachi, a Leather Cap, a Foot Ninja Gear and Iron Gloves.

Gekkou is fought as a boss, along with the remaining Eblan Four, at the beginning of Edge's Tale, as part of a training session. 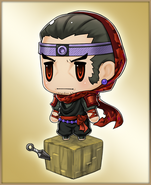 Gekkou at the Tower of Babil (iOS).

Like the other Eblan Four, Gekkou's name is related to the moon. [view · edit · purge]Gekkou means "moonlight" in Japanese.