Gaze (しせん, Shisen?), also known as Glance or Glowing Eyes (光る目, Hikaru Me?), is a recurring enemy ability in the series. It usually inflicts a status effect, normally Paralyze, to a character.

Gaze is an enemy ability used by various enemies and has differing effects.

Glare comes in three different versions. One version can inflict Petrify, while another can inflict Sleep, and the last can inflict Confuse. None of them inflicts any damage to the target.

Gaze (originally called Glance) is an enemy ability used by Bloody Eye. It has one in three chance of inflicting either Confuse, Sleep, or Paralyze. Lunar Titan's version of Gaze, it inflicts Gradual Petrify. Calcabrina can use this ability.

Gaze is an enemy ability exclusive to Plague in the Advance remake. It inflicts Confuse to one target. Glare is used by Outcast, which inflicts Blind to one target.

Glowing Eyes is an ability used by Hecteyes. It inflicts Sleep on one character.

Gaze is an enemy ability used by Sin's head. It inflicts massive non-elemental damage to the party.

Several enemy abilities are referred to as Gaze attacks. These attacks are only effective if the user and the target are facing each other. Notably, the Hecteyes genus does not have to be "facing" its target, as it has eyes on all sides.

Phantasmal Gaze is an enemy ability that can Confuse all party members in range. It is used by Ahriman, Bogey, Cubus, Etherian, Feral Croc, Foobar, Hecteyes, Jelly, Melt, Necrofiend, Oiling, and Orthros.

Devil Gaze is an enemy ability used by Floateye that inflicts Silence and Darkness in an area two spaces in front of the monster.

Evil Gaze is an ability usable by the Elementalist job. It deals Dark damage and may inflict Confuse.

Gaze is an enemy ability used by Lamia and Naga. It inflicts Confusion to a single party member.

Gaze is an ability that has 10 uses and inflicts Curse to a group of enemies. This ability is used by Medusa, Seeker, Watcher, Wraith, BlackCat, Evil Eye, Scylla, Beholder, Ghost, Lilith, Nike, Basilisk, DarkRose, Ganesha, Athtalot, Lamia, Vampire, and Ashura.

Gaze is a status inflicting ability that has 15 uses, it also increases a Robot's HP by 9. It inflicts Curs to one group of enemies. This ability can be used by Athtalot, Beholder, Big Eye, BlackCat, Evil Eye, Gazer, Ghost, Nitemare, and Watcher.

There are two version of Gaze, the first version inflicts Para to one enemy and the second inflicts Curse to one enemy. This ability is used by Big Eye, Evil Eye, GreyWolf, Snake, Typhoon, Serpent, EvilMask, Tempest, Romulus, Ashura, and Dahak.

X-Gaze can inflict Fatal to one enemy. Serpent and Garuda can use this attack.

The Void Prisoner and the Carbuncle can use this ability.

Glare is the ability used by the summon Calcabrina. When summoned, Calcabrina uses Glare to cancel the opponent's Break status and brings their Bravery to 0.

Gaze is an active magic ability that inflicts neutral magical damage and Confusion on a single target for 4 AP. It can be used by Ahriman, Death Searcher, Dramut, and Mimic Queen.

It is also an enemy ability used by Mimic Queen.

A card depicting Medusa is able to use Gaze as its ability. For the discard of another Medusa card, as long as she is the player's Forward the opponent's Forwards cannot attack or block for the rest of the turn. 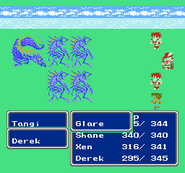 Glare in Final Fantasy IV: The After Years (PSP). 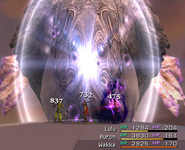 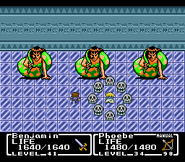