The Gauntlets (ガントレット, Gantoretto?), also known as Pride of the Ronso or Bronze Gauntlets, are a recurring piece of equipment in the series. They change off and on from being either an armor, weapon, or accessory from game to game, and usually grants bonuses to physical stats.

Gloves that cast Thundara when used.

The Gauntlets appear in the Citadel of Trials, and can be used by Warriors and Knights. They provide +6 Defense, +3 Weight, and cast Thundara when used as an item.

The Gauntlets are a mid-ranked glove that can be equipped by the Freelancer, Onion Knight, Warrior, Knight, Dragoon, Viking, Dark Knight, and Ninja classes. They can be found in a treasure chest in the Dwarven Hollows.

The Gauntlets (Steel Gloves in Easy Type) are the first piece of gloves Cecil can equip once he becomes a Paladin. They are bought in Mysidia for 3,000 gil, and provide +5 Defense and +1 Magic Defense and Magic Evasion. This armor is metallic.

The Gauntlets are a low-ranked armor that provides +5 Defense, +1 Magic Defense, -10% Evasion, +1% Magic Evasion, and +3 Spirit, as well as resistance to attacks from undead. It is initially equipped on Cecil.

The Gauntlets are a weak accessory used by the heavy melee classes. They provide +6 Defense and +1 Magic Defense, and can be bought in Castle of Bal, Surgate Castle, and Quelb for 3,000 gil.

Steel hand and forearm guard used by knights. Allows one weapon to be held with both hands.

The Gauntlet is a relic that allows for a character to equip one weapon with both hands and increases Defense by +5. They can be found in Kefka's Tower, Yeti's Cave, and Returner Hideout after saying "Yes" to Banon when he asks if Terra will help the Returners.

Gauntlet is a weapon for Zell that provides 20 Attack and 101% Hit. It can be obtained at a junk shop by trading 400 gil, Dragon Skin, and Fury Fragment.

The Gauntlets are the most powerful arm gear for Steiner and Freya. They provide +36 Defense, +7 Magic Defense, +1 Speed, and halve damage from Fire, Earth, Water, and Wind-elemental attacks.

The Gauntlets teach the support ability Cover. They can only be synthesized at the Black Mage Village (disc 4) for 8,000 gil, Mythril Gloves, and a Dragon Wrist.

Pride of the Ronso is an armor for Kimahri, obtainable if the dominant abilities on any armlet are Break HP Limit and Break MP Limit.

The Gauntlets are a weak accessory that boost Strength and Defense by 5. They can be bought in Rin's Travel Agency on Mi'ihen Highroad (chapters 1/2) for 2500 gil and stolen from Stalwart (rare).

In the original version, the Gauntlets are an accessory that improve the chance for the wearer to block with a shield (increases evasion and magick evasion by 10, except when shield has 0 in either). They can be bought from Dalmasca Estersand, Dalmasca Westersand, and Dreadnought Leviathan for 1200 gil, found in a treasure in Ogir-Yensa Sandsea (Platform 1 - South Tanks) and obtained as a reward for the Wraith hunt.

In the Zodiac versions, Gauntlets instead give the same effect as the Last Stand augment in having the wearer take half physical damage when in critical health, and also add +1 to Defense and +5 Vitality. They can be bought in Rabanastre for 1,200, earned as a reward from the Wraith hunt, stolen from Ripe Rampager (10%) in Trial Mode Stage 3 and found as a treasure in Stages 27 and 35 with the Diamond Armlet.

Gauntlets are an accessory for Llyud that gives the support ability Valor which increases the team's Attack power by 10%. They can be bought Chapter 3 onwards for 800 gil.

Marauders. They can be crafted by

Armorers; obtained from the quests

On a Wing and a Prayer,

That Old Familiar Feeling, and

Gloves that stretch from elbow to finger.

The Gauntlets are the weakest glove, providing +5 Defense and Attack. It can be bought from any shop for 1,700 gil.

These long gauntlets protect from the elbow down to the tips of the fingers.

The Gauntlets are the second best gloves, providing +2 Attack, +5 Defense and Resistance, and teaches Critical: Berserk to both Defenders and Berserkers. It can be bought for 7200 gil in the shop after creating it in the Bazaar after using a Platinum, Tanned Tyrant Hide, and Wyrm Carapace.

Gauntlets boost Defense by 10. They can be bought in McTighe for 500 gil.

Gauntlet is a mid-ranked armlet that provides 5 Strength, 6 Intelligence, and -1 Agility.

The Gauntlets are the weakest armor for Lilty. They provide only +5 Defense.

The Gauntlets are an accessory that can be equipped by Jobless, Memorist, Warrior, Dragoon, Dark Knight or Paladin. They grant DEF +5, EVA +3, STR +3 and VIT +3. They can be purchased for 3800g from the Armories in Chapter 3 at Fabrica, Gardenia (only after the Imperial Camp), Berth, and Hagakure.

The Gauntlets are a level 22 glove that increase Bravery by 17 and Defense by 16. They can be bought for 6,050 gil at the shop.

Gauntlets is a level 1 gauntlet that provides +21 Bravery and +14 Defense. It can be obtained by trading 8,810 gil.

A sturdy pair of gloves made from iron. There are many types of arm guards available, but among them, gauntlets offer protection to every single finger on the hand. This extra protection allows users to freely use their fingers without worry when wielding swords and bows, and also enables them to deflect attacks with their hands. Because of this, many adventurers across the land choose this as their gear of choice in battle.

Gauntlets is an accessory that provides 5 DEF, 5 SPR, ATK +20%, and enables the user to equip light shields. It can be bought from Mama Chocobo at Georl for 200 Star Quartz, and only one may be obtained.

A piece of glove-shaped metal armor that is worn to protect the hands and fingers. It allows each finger to move individually, allowing for a decent degree of freedom in hand and finger movement. 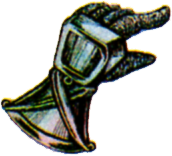 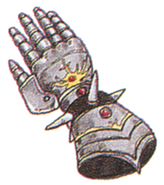 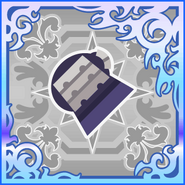 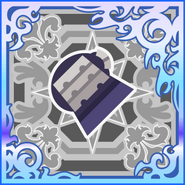