Gau's father's house is a location in Final Fantasy VI on the northern continent, situated north of Doma. It is east of Narshe and Nikeah, and separated from them by mountains and rivers. Inside lives Gau's father, who is insane and thinks that anyone who enters the house is the repairman, asking them to fix his appliances. Examining the oven will make the player character yelp in pain, as if they were burnt. There is a traveling merchant who stops by here on a chocobo. The player can rest on the bed.

After falling off a raft on the Lethe River, Sabin washes ashore near Aged Man's house. The assassin for hire Shadow is with his dog, Interceptor, near the home, and offers to accompany Sabin to help him traverse the Imperial Camp to the south to get to Doma.

If the party returns to the house in the World of Ruin with Sabin and Gau, Sabin tells Gau he believes the man living here is the latter's father. The party visits Jidoor where the party teaches Gau proper manners and dresses him in fine clothing before presenting him to his father. Gau's father recounts his twisted version of how he remembers Gau's birth, believing it to be a dream, but Gau is happy his father is alive nonetheless.

In the World of Ruin, visiting the old man in the house with Sabin and Gau in the party initiates a scene where Sabin speculates that the old man is Gau's father, and takes him to Jidoor to get him proper clothes and teach him manners before introducing him. During the clothing scene, if the player has recruited Terra and Cyan they will have additional dialogue, and if Edgar and Locke are in the party they will also have additional dialogue and Gau will try on an extra outfit. Only Edgar and Locke need to be in the party for their dialogue to occur, Terra's and Cyan's trigger as long as they have been recruited. Setzer and Celes have specific dialogue as well, but since they must always be recruited in a normal game, their dialogue will always trigger. After the clothing scene the party returns to the house and present Gau to the old man.

This quest can be done any time during the World of Ruin with Gau and Sabin in the party. There are no material rewards for this quest.

"What?" from Final Fantasy VI

The background theme that plays at the cabin is called "What?". The arranged version of the theme is labelled as "What? 2" in the Pixel Remaster's music player.

This location is referred to in the menu as Cabin in versions of the game with the feature. The area is referred to as House on the Veldt in the Final Fantasy III Nintendo Player's Guide[1] and Final Fantasy Anthology Official Strategy Guide[2]. The map in the original SNES instruction booklet identifies this location as House in the Veldt, but places the marker for it in the northwest corner of the Veldt near the foot of Baren Falls, rather than the house's actual location much further north. The area has been consistently referred to as 一軒家 (Ikken'ya?) in Japanese guides and the game, which is written in English as Solitary House in the Final Fantasy VI Settei Shiryō-hen[3]. 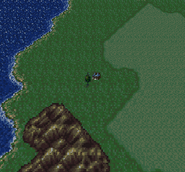 Gau's father's house in the World of Balance (SNES). 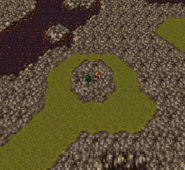 Gau's father's house in the World of Ruin (SNES). 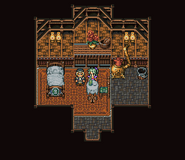