Teddy bear he had when he was abandoned[2]

A youth draped in monster hides, his eyes shining with a warm and gentle light...

Gau is a playable character in Final Fantasy VI. He is a feral child who grew up on the Veldt, learning to mimic the behavior of monsters. Sabin and Cyan earn his trust while traveling through the Veldt and he becomes an unlikely ally of the Returners.

Gau has little direct connection to the story of Final Fantasy VI, and his presence was intended more as a way to grow the world of the game over serving the main narrative.

Gau was born in a house north of the Veldt. During childbirth Gau's mother died and his father went mad with grief. He believed Gau was a demon and fled to the Veldt and abandoned him there. As part of his delusion, Gau's father convinced himself it was all a dream and he had never had a wife or son. Gau grew up among the monsters of the Veldt, learning to fend for himself. The citizens of Mobliz knew of him but not where he came from, and Gau kept his distance from the town.

To escape the Empire that had taken over Doma Castle, Sabin and Cyan leapt off Baren Falls and washed up on the Veldt. Gau found them and investigated, but grew frightened and fled when they awoke. The two traveled to Mobliz and learned that Gau had a taste for dried meat. They purchased some and the next time they encountered Gau threw it to him. Gau devoured the treat and demanded more, but Sabin refused. After a tussle between the two, Cyan interrupted them and introduced themselves. Gau offered a gift in thanks for the food, something he claimed was a "shiny treasure", and took them to the Crescent Mountain Cave.

Gau's treasure was a diving helmet stolen from Mobliz, which the three used to swim through the Serpent Trench to Nikeah and then boarded a ferry to South Figaro, where Sabin was to meet the other Returners. Cyan assured him they surely had made the journey safely and Gau echoed his hope they had. At Narshe, the Returners defended the town from an Imperial invasion led by the Imperial court mage Kefka.

Gau continued to fight alongside the Returners in the war against the Empire. Eventually, Kefka acquired the power of the Warring Triad, the gods of magic, and caused a cataclysm that reshaped the face of the planet and scattered the party. In the new world, Gau passed through Maranda at some point and met Cyan. Gau told Cyan he was planning to get stronger to challenge Kefka, and Cyan presumed Gau intended to return to the Veldt to train. The Returners, regrouping one by one, found Gau there. Gau recognized them and rejoined them.

The party visited a house inhabited by a crazy old man, and Sabin theorized he could be Gau's father and took Gau to Jidoor to teach him etiquette and give him a makeover so they could show his father what a fine man Gau had become. The party returned to the house with Gau now properly groomed and in a fine suit, and Sabin introduced the two and told the man Gau was his son.

The old man claimed to have no son, but recounted his dream of being married and his wife being killed by a demon child whom he abandoned on the Veldt. While the man was terrified of the dreams, he complimented Gau and said his parents must be proud of him. The old man's rejection infuriated Sabin, but Gau stopped him from attacking the old man and left the house. Outside Sabin apologized to Gau for what happened, but Gau seemed to recognize the old man as his father and was happy he was alive.

As the party escaped the crumbling Kefka's Tower, Gau called out that he found a "shortcut", and jumped on a pile of loose rocks that he rode down to a lower part of the tower. The others followed him, and Gau repeated he had found a shortcut, and repeated the incident by forcing Celes to ride another rock across the tower.

Gau is a teenager with wild hair tied up in a ponytail and mis-matched clothes made of animal hide. His hair is dirty blond in his Super NES sprite, but his portrait and all other appearances depict him with green hair. He wears a yellow shawl with large orange dots over his shoulders and upper torso clasped with an emblem resembling a monster's head, and his shorts are green with yellow dots and held up with a red belt. Gau's eyes are bright red. In some concept art Gau foregoes his shawl and wears only his shorts. He wears no shoes, just red bands around his ankles and the middle of his feet, and he wears identical bands on his wrists.

Gau struggles to articulate a response

Having grown up alone in the wild, Gau has little concept of civilized society and behavior. He mostly communicates in animalist howls and growls, or uses short sentence fragments with improper grammar, including referring to himself in the third person. He is not to be thought of as stupid, however: he is capable of understanding complex concepts such as love, friendship, grief, and gratitude. He quickly bonds with Cyan and Sabin when they feed him, and even though Sabin dislikes him, Gau jokes around with him seemingly oblivious of his distaste. He forms strong friendships with the party, sticking with them through the war with the Gestahlian Empire despite no reason for him to do so.

Gau can be considered an innocent, pure-hearted boy. When he has a chance to meet his father, rather than express anger or sadness, Gau is happy that his father is alive, not holding any grudges. He obsesses with shiny objects, hoarding them in Crescent Mountain Cave where he seems to make his home. He fears heights, often expressed when aboard an airship.

Having grown up surrounded by dangerous animals and monsters, Gau is able to use his Rage ability to mimic their behaviors and use their attacks. In Final Fantasy VI, Rage sends Gau into a berserk state where he will automatically attack each turn. While under the effects of Rage, Gau will use either a normal attack or a special attack associated with the enemy's Rage he is using, and also gains their elemental affinities and innate statuses.

Gau's special ability is Rage, which allows him to imitate enemies' elemental affinities, status effects and resistances, and abilities. He is uncontrollable for the duration of it, but depending on the situation, can become resistant to foes' damage or more powerful against them. He can only imitate enemies that are fought in the Veldt. For enemies to appear on the Veldt they must have been fought (not necessarily defeated) elsewhere first. Gau can then Leap into an enemy formation while on the Veldt and temporarily leave the party.

Unlike most characters, Gau has no normal attacks, and thus no Desperation Attacks. His stats are all around high, though his defensive stats are low. While he cannot equip a weapon, he makes up for it with not only his Rages but also his high natural attack power.

Because Gau does not have a Fight command, he has no Desperation Attack, a trait he shares with Umaro.

Gau's eponymous theme plays when he finds Sabin and Cyan lying near a river after they dove into the Barren Falls, as well in the ending sequence. It was selected and rearranged for both the Piano Collections: Final Fantasy VI and Final Fantasy VI: Grand Finale albums.

Gau has made guest appearances in several titles in the Final Fantasy series.

In most titles Gau functions as a physical attack unit in combat. His Rage abilities are often used as his unique abilities, such as Cat Scratch and Lifeshaver. Depending on the titles, he is associated with either the wind, lightning, and earth elements.

Though Gau cannot equip weapons in Final Fantasy VI, in spin-offs he uses knuckles and claws.

Gau has made appearances in the following games: 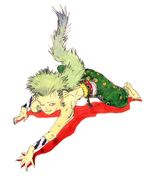 After it was decided Final Fantasy VI would feature an ensemble cast with no clear main protagonist, everyone in the development team was encouraged to provide ideas for characters and their episodes. Gau's character and story were colored by influence from Yoshinori Kitase.[3] The developers acknowledge that Gau doesn't have much to do with the game's plot, but is something of an extra character.

Originally, the reunion with his father was supposed to take place in the World of Balance.[4][5] To see the full version of the armor shop scene where the party dresses Gau up to go meet his father, the player must have both Locke and Edgar in the party, while Terra, Celes, Cyan and Setzer must be waiting in the Falcon.

The game has a dummied scenario regarding Gau and the Imperial transport ship in Albrook that the party takes to Thamasa. If the player tries to board the ship with Gau in the party, a scene will play of him leaving and Locke and Terra decide to leave him behind since he doesn't want to travel on the ship. The developers likely intended this as a failsafe if the player has Gau Leap on the Veldt and then goes to retrieve him after the Imperial Banquet, but doing so is impossible as there is no way to get from the southern continent to the Veldt at this time. If hacks or glitches are used to get Gau into the party at this time, the scene will play fully.

Yoshitaka Amano artwork of Gau along side the rest of the main cast from Final Fantasy VI (Advance). 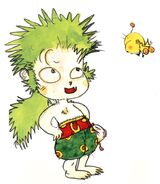 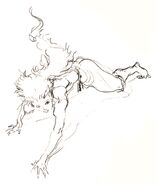 [view · edit · purge]Gao is the Japanese onomatopoeia for a growling and snarling sounds made by large beasts, such as lions and bears.