Gatling Gun (ガトリングガン, Gatoringu Gan?) is a recurring weapon in the series. It is most often seen whenever Barret Wallace appears, as it is his default weapon.

Gatling Gun is the starting weapon for Barret, equipped by default and is unique (the weapon cannot be sold, stolen, or thrown). It provides 14 Attack, 97 Atk%, is Long Range, and has one unlinked materia slot with Normal growth.

Gatling Gun is also Barret's default weapon in Final Fantasy VII Remake. By default, it has only 19 Attack Power and 19 Magic Attack with one materia slot, but when fully upgraded, it has 77 Attack Power and Magic Attack, as well as six slots. Its weapon passives focus on durability, and the weapon's balanced stats make it a versatile weapon.

While not an equippable weapon nor named in-game, the weapon that Amodar carries with him is the Gatling Gun. 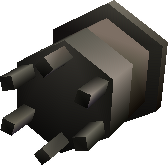 [view · edit · purge]The Gatling gun is one of the best-known early rapid-fire weapons and a forerunner of the modern machine gun named after its inventor Richard Gatling. The Gatling gun's operation centered on a cyclic multi-barrel design which facilitated cooling and synchronized the firing/reloading sequence. Each barrel fired a single shot when it reached a certain point in the cycle, after which it ejected the spent cartridge, loaded a new round, and allowed the barrel to cool allowing higher rates of fire without the barrel overheating.