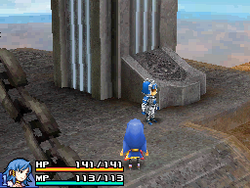 The Gate (門, Mon?) is a place in Final Fantasy Crystal Chronicles: Echoes of Time. It is partially accessible at the beginning of the game, but cannot be completely traversed until near the very end. It is the access point to the Tower where the final battle awaits.

The Gate is used regularly by Larkeicus to access the Tower. It has been sealed with a form of powerful magic to prevent access by anyone else.

Near the end of the game, the Gate is opened when the Hero activates the ruins atop Fire Mountain and Ice Mountain. At this point, the Undead Princess is abandoned, and the party proceeds up the Tower.

After the ending, the player can talk to the Undead Princess and she can conjure a spell to recreate the gate and tower dungeons.

Gate on the world map.