An enormous, high-tension bow. Difficult to draw, but well worth the trouble.

Gastrophetes (ガストラフェテス, Gasutorafetesu?), also known as Gastraphetes and Gastrafitis, is a recurring weapon in the series. It is generally the most powerful crossbow in the games it appears in.

The Gastrophetes is the Ranger Mythic Weapon, and as such requires the player complete several complicated and expensive tasks. It is a crossbow with average speed and attack for the weapon type. It grants access to the mythic Weapon Skill Trueflight. Due to the poor damage of crossbow ammunition compared to bullets and arrows, the high cost of the weapon, and the low damage of its magic based Weapon Skill, very few Gastrophetes have been made.

The Gastrophetes is the strongest crossbow, providing 76 Attack and 7% critical rate. It can be bought for 18,900 gil at the Outfitters Shop as part of the Hunt Club sidequest after giving 25 Trophies to Atak, or stolen from Pallicant. It requires 75 LP and the Crossbows 4 license in order to equip. Crossbows are the fastest ranged weapons at 2.3s charge and 1.4s action.

In the Zodiac releases, it now provides 84 Attack, 5 Evade, 24 CT, 7% critical rate, and requires the Crossbows 4 for 115 LP. It can be found as a treasure in Cerobi Steppe (Old Elanise Road), or stolen from Pallicant (3% chance) or poached from it in Trial Mode in Stage 43. It is also a rare steal from Tyrant in Stage 55.

The stronger version, Tula provides 91 Attack, 5 Evade, 24 CT, 7% critical rate and requires the Crossbows 4 license for 115 LP. It can be found as a treasure in Pharos - Second Ascent (Station of Suffering), or from the Hunt Club sidequest. Both weapons can be equipped by the Time Battlemage.

The most powerful crossbow ever created. Its unusual size gives it a very strong recoil.

The Gastrophetes is the strongest crossbow, providing 10 Attack and 5% Weapon Defense. It can be bought for 20,000 gil at an Outfitters in Chapter 4 at castles or at the Clockwork City of Goug, won from the Battle of Fort Besselat, or found as a rare treasure at the Limberry Castle undercroft. Only the Archer or a character equipped with the ability Equip Crossbows can use the weapon.

This giant bow is strong but difficult to fire.

Gastra Bow is the second strongest greatbow, providing 51 Attack and 7 Range. It teaches no abilities.

The Gastrophetes is a high-ranked greatbow, usable only by the Hunter, Sniper, and Assassin classes. It provides 48 Attack, 5 Defense, 10 Resistance, and has a range of 7 tiles. It teaches no abilities to any classes, and can be gotten through the Bazaar through the Heavy Bows B category.

While not an equippable weapon, it is wielded by Vaan during his Crossbow attack. 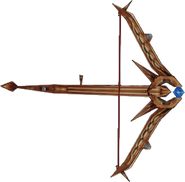 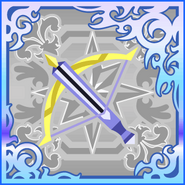 [view · edit · purge]The gastraphetes was a hand-held crossbow used by the Ancient Greeks.