Garuda (ガルーダ, Garūda?) is a recurring Wind-elemental summon in the series. She is usually depicted as a green-tinted woman with claws and talons and wings protruding from her back. Aerial Blast is a common summon ability for Garuda. 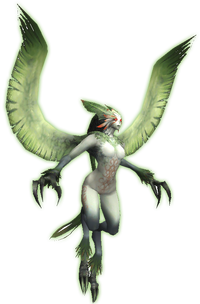 Garuda appears as one of the eight celestial Avatars, also known as sleeping gods, representing Wind. She can be acquired from the Cloister of Gales at Cape Terrigan. She can cast a number of wind-based spells and abilities in addition to using her claws to physically damage enemies.

Perhaps one of her more commonly used abilities is Aerial Armor, which gives every member of the party the effect of Blink, or Hastega which grants haste to every member of the party and is exclusively available to Garuda, but she also does have limited abilities which allow her to heal party members. Garuda is also highly respected for her Predator Claws attack, a devastatingly powerful strike that is often the Summoner's staple attack for notorious monster fights.

Garuda was a small bird raised by a young prince. When the prince got attacked by a viper, Garuda looked for means to cure him. Another bird informed her that she should seek the aid of the King of Birds, who could awaken the healing wind, Vuychap. Garuda flew ever further upwards, looking for the King of Birds, but couldn't find him anywhere. Having reached the limits of her strength, she fell from the sky, but her resolve was so powerful that she transformed during her fall, gaining a humanoid shape and regaining her vitality.

She realized that she now had the power to heal the prince, and did so, leaving him afterwards, as she no longer looked like the little bird he had raised. However, it is said that, once the prince grew up, he managed to find her and married her. Upon Garuda's death, Altana transformed her into the Celestial Avatar of Wind because of her loyalty and devotion. Vuychap is the name of the brightest, green-colored star of the Garuda constellation.

The queen of storms, Garuda is the chosen primal of the Ixal.

Though elegant of form and graceful in motion, the capricious and ruthless nature of this bloodthirsty being engenders mindless terror even amongst her devoted worshippers. Her wrath often erupts without warning, and descends upon her victims with unbridled fury.

Garuda is the primal worshiped by the Ixal, and is known as the Empress of Birds. It is said that in past ages, Garuda slew the malevolent Lord of Snakes to end his foul attempt to bind the world's creatures to the earth. Though birds became free to roam the skies, Garuda was terribly wounded by the battle and was forced to feast upon the snake's carcass to recover her energies, said to have since developed a taste for the flesh of land-bound mortals.

Among the primals, Garuda is infamous for her destructive and unstable behavior, usually outright killing people. In 1.xx, she attacked the Quarrymill, unleashing strong winds over the hamlet and laughing madly. After being defeated, Garuda lamented over losing her power as she dissolved into wisps of energy that ascended towards Dalamud. In V2.0 A Realm Reborn, she expresses a desire to become an all-powerful goddess, a sentiment that is shot down by Gaius van Baelsar.

Summoners can summon the caster-type pet Garuda-Egi to aid them in battle.

In Final Fantasy XIV: Stormblood, Garuda herself can be summoned by players in the Deep Dungeon Heaven-on-High when using the respective Magicite.

Another Garuda is fought as a boss, alongside Ifrit, in the Eden Raid in Final Fantasy XIV: Shadowbringers, manifested from the memories of the primals from the Warrior of Darkness to restore life on the rest of the First. Halfway during the battle, the two heritors fuse to form Raktapaska.

Garuda is a Messenger of the Winds, an ancient being once defeated by the Astrals in battle and sent into long slumber. Her true name lost, she takes the name of an invading goddess and aids Noctis in a similar way to the Astrals. She appears in the "Adventurer from Another World" collaboration quest added in patch 1.27.

Garuda, the Warden of the Wind will appear as an Eikon, with her Dominant being Benedikta Harman. In addition, Clive Rosfield can utilize her power in combat, allowing him to use her talons in battle.[2] 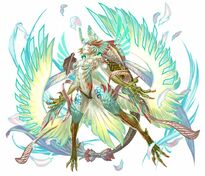 Garuda is a wind-elemental summon. There are three versions of Garuda available; two versions available to Wrieg and a version available to Maina.

In the original free-to-play version, all three versions of the summon could only be obtained through the summon drawing shop and equipped by any party member.

A fal'Cie named and based on the summon was pitched for Final Fantasy XIII, but ultimately scrapped in the final game. 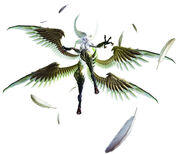 Garuda-Egi summonable by the player in Final Fantasy XIV. 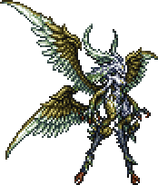