Garuda is a boss in Final Fantasy III. He is the monstrous form taken by Gigametz, the malicious advisor to King Gorn of Saronia.
See also: Garuda (enemy)

Garuda is strong, as his Lightning attack can hit up to 800, usually killing most of the party in one shot.

In the 3D remake versions, Garuda attacks twice per turn and has a fairly powerful physical attack that deals several hundred HP of damage. The upshot is that Garuda often uses two physical attacks per turn instead of Lightning, which makes the battle somewhat easier. There is the rare possibility Garuda will fire off two Lightning attacks in succession, destroying the party in a single turn.

The game advises to form a party with four Dragoons by providing multiple spears as treasure in the Saronian area, particularly in the Dragon Spire in Southeastern Saronia. By using Jump and Wind Lances, Garuda will fall easily. If one cannot afford to purchase Wind Lances for all party members, one should invest in Thunder Spears. They deal less damage but will get the job done, especially if each Dragoon wields two. Another strategy would be using Raven's Yawn with the Scholar class, providing double damage, which will, along with its weakness, cause heavy damage or instant kill. The entire party are advised to equip the Feathered Cap as this can provide some magic defense against Garuda's Lightning.

To prepare, players can grind in the Ancient Ruins by fighting Pyralises in the first floor, which award 3,600 EXP for a party of four before entering the castle. However, they hit hard, and they only use their physical attack two times in a turn, which deals 600+ damage per hit, potentially wiping out the party if the player is not careful, as it can KO any Mage in a single hit. Players are advised to escape from other monsters in the ruins that give less EXP. 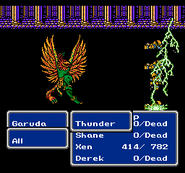