The beautiful princess of Alexandria. Though Garnet is refined and elegant, she lacks worldly experience, and on occasion she can even be selfish. Her time spent with Zidane kindles the spark of change within her.

Garnet is an optional character in Final Fantasy Record Keeper who appeared in the Princess of Alexandria - The Path to Escape, Someone to Protect, and A Summoner Reborn Challenge Events.

After Garnet reaches level 50, the player can break her level cap, increasing it to 65 by using a Garnet Memory Crystal. One could be obtained in Ice Cavern - Icy Path 3 on Elite during the Princess of Alexandria - The Path to Escape Challenge Event as the First Time Reward.

Garnet is the stronger of the two Summoners from her game of origin as well as a competent White Mage, though she will fall behind others in her occupation like Rydia and Yuna who can use rare magic. Still, Garnet is well positioned as a buffer and can cast useful healing spells in the -ja class. Her dominant elements are lightning and holy, as seen during her game of origin, where she has a connection with Ramuh (the first Eidolon she reuses after losing her powers) and Alexander, yet she also has a minor proficiency in the water element. She is one of the more elusive acquisitions but it is worth the effort to have her.

After Garnet's level cap is increased she automatically gains the Record Materia, Blessing of Alexandria, which when equipped grants the user with a one-time Regen per battle when the user is low on HP. Her second Record Materia, Healer, causes attacks to heal similar to the Support Ability of the same name in her original game, though the amount healed is based on the users Mind stat, is blocked by Silence, and targets the party member with the lowest health by default. 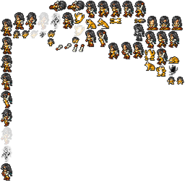