A knight whose skills and advice are incontrovertible.
Though clad in heavy armor, his demeanor is less than guarded, and he never shies away from stating the brutal truth.
He sees something in Wol, and offers to guide him on his path to becoming the "Warrior of Light."

Garland is a non-player character in Mobius Final Fantasy.

Garland is a tall man wearing full suit of silver armor; his helmet features large horns resembling partially-folded bat wings, and cut-outs in the faceplate resembling facial features, the right side which has a red-orange glow. He wields a distinctively-shaped rust-colored greatsword with a serrated edge. Underneath his suit of armor he is a man with long brown hair, blue eyes and stubble beard.

In spite of being branded a heretic, Garland carries himself in a confident manner and often lends Wol his aid, claiming he sees great potential in him. He does not trust Vox or women, least of all Princess Sarah, warning Wol to not trust either of them. Garland does seem to trust moogles, as he leads Wol to rescue Mog, effectively indebting Wol in their collective gratitude.

In spite of being a heretic, or perhaps because of it, Garland knows more about the prophecy than most and seems the most willing to share it with Wol, even more so than any of the moogles, gaining Wol's trust.

Shortly after Wol awakens alongside the other Blanks, he is approached by a man in a suit of armor, who wants him to follow Vox's instructions to travel north. Along the way, he introduces himself as Garland. He explains his purpose is to temper the Blanks in which he sees potential, and that he senses greatness in Wol. He recommends that Wol rescue Mog, a moogle beset by monsters. Once rescued, Mog identifies Garland as a "heretic".

After Wol meets Princess Sarah, Garland approaches him once more, this time to warn him to be wary of her. Vox orders the Blanks to slay Garland, stating that a heretic cannot be allowed to approach the princess's castle. Although Wol does not follow these instructions himself, he observes several other Blanks attempt to confront Garland whom are defeated with ease.

Garland approaches Wol shortly after Mog's death to lead him to converse with Princess Sarah and to the next Teleport Stone. When Wol questions him on his role in the prophecy and the unfolding events, Garland explains that he had refused to side with either good or evil, and was declared a heretic as a result. After taking off his helmet to reveal his face, Garland warns him that should Wol fail in his quest, he will simply find another Blank.

Garland accompanies Wol to Princess Sarah's castle while telling him not to lose his heart to her. When Chaos mounts an assault on the castle, Garland travels with Wol across the battlefield, offering advice and observations as they watch countless Blanks throw their lives away. After Wol defeats Chaos and drives him back, Garland takes him to meet Sarah. Although he initially allows them to talk alone, he interrupts once Sarah begins to declare her love for Wol, insisting that it's time to move on. When Sarah asks Garland for his name, he refuses to answer, and leaves without speaking to her. He parts company with Wol, stating that he has held his hand for long enough, and that Wol needs to manage on his own for the time being. 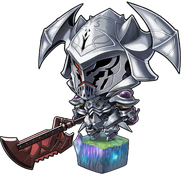 Garland appears on Triple Triad cards in the version available via the Final Fantasy Portal App.

Garland without his helmet.