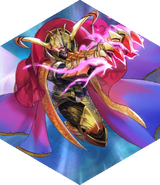 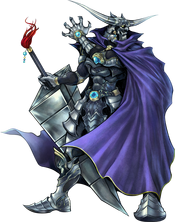 Garland appears as a Warrior of Chaos representing the original Final Fantasy and opposing the Warrior of Light.

As Chaos's right-hand warrior, Garland knows the war's true nature and its endless cycle, giving him an advantage above the other warriors. Confident he will be reborn no matter how often he is struck down, he enjoys the battles of the war and appears to attack the heroes several times, and acts as counsel to the warriors. However, Garland's true connection to Chaos and the cycle of war is not revealed until the game's final storyline, when the Warriors of Chaos act of their own volition and desert Chaos. This leaves Garland as the only warrior standing alongside the god of discord, when he reveals the truth to him.

Garland's alternate outfit gives his armor a sepia color tone to give it a weathered look.

Garland plays a minor role, taunting Lightning about the manikins and later acting as the final boss of Scenario 012 in battle against her. He is present when the Emperor brings Jecht to Chaos to have him made a Warrior of Chaos, and suspects the Emperor has ulterior motives. In a flashback shown in the Reports, he is present when the Warrior of Light first appears in World B, and battles Prishe to see which will take him to their respective god to have the Warrior imbued with their power.

Near the end of the game, Garland tells Golbez that he was once imprisoned within a time loop until The Great Will freed him to preside over the war of the gods and nurture Chaos to war with Cosmos. One of the Reports written from Garland's point of view tells of his summoning to World B, before the cycles of war began, when he reflects on the time loop. This serves as one of several examples of the events of Dissidia Final Fantasy intertwining with the events of Final Fantasy. 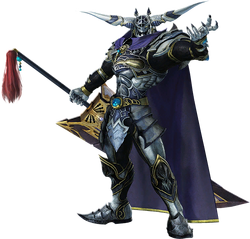 Garland is a playable character and a representative of Final Fantasy. He is available via update on 21 April 2016. He is classed as a Heavy-type fighter, and is the first playable antagonist to be added. His armor and weapon has been given an significant overhaul, but otherwise retains his classic look.

He also has a new voice actor, Kouji Ishii, due to Kenji Utsumi's death from peritoneal cancer in 2013.

Garland appears as an antagonist in the game's story mode, his look being his revamped design from Dissidia Final Fantasy NT.

A former knight of Cornelia. His lust for power results in his abduction of Princess Sarah, whose purity and reasoning would not be enough to quell the growing darkness in his own heart. Though felled by the Warriors of Light, this merely puts his plan in motion, travelling two millennia into the future and plunging the world into darkness.

Garland is a playable character, and is the representative antagonist of Final Fantasy. Added via update on March 1, 2017, he is unlocked by collecting Dark Crystal Shards. His appearance is based on his Dissidia attire, and wields his version of the Claymore. 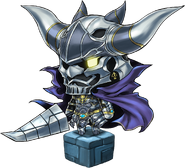 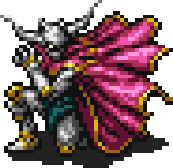 Garland is present as both a boss and a Legend. 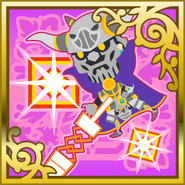 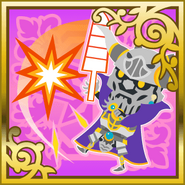 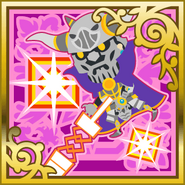 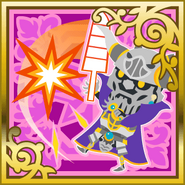 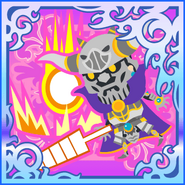 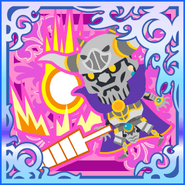 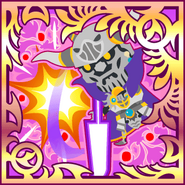 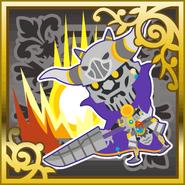 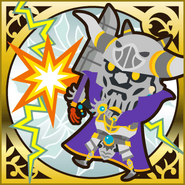 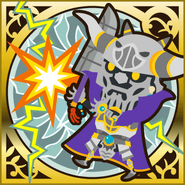 Garland is a boss and a playable character who could be initially recruited during the Challenge Event Discord and Harmony (Cosmos), where he was a First Time Reward for completing the event's Warrior of Light stage. As he is also a deuteragonist in Mobius Final Fantasy, he was also available in the Collector's Event Doorway to Another Realm as a First Time Reward for clearing Desert Runic Temple - Hard.

Garland appears as a Summonable vision and optional playable character. A 3-6★ Rare Summon, his job is listed as Chaos Knight, and his role is Physical Damage. He originally could awaken only up to 5★, but received a new form alongside Warrior of Light. His Trust Master reward is the passive ability, Equip L Sword.

Age: Immeasurable
(Age of the soul within estimated to be about 2000 years old)

Notes: An odd, peculiar, strange, and enigmatic Mirage / May remind some of Gilgamesh, but totally is not

Light and Shadow
When the Warrior of Light legend was realized in Grymoire, this unique Mirage was born as a counter to the light, an "Antichampion," if you will.

Ancient Grudge
The original possessor of this soul has had an intense rivalry with the Warrior of Light since he was still known as a man named Garland. Because the two had engaged in epic battles against one another, when one appears in a world, the other one inevitably comes into being as well. Rather than an Antichampion, it may be more accurate to describe him as a living calamity with very little conscious thought. He has appeared in the A-World as a Mirage.