Garland's default player name is Nameless Stalwart, and his manikin counterpart is renamed the False Heretic.

Garland's default costume is the "Knight of the Cycle", a new appearance for Garland compared to previous Dissidia games. His horned helmet has a more monstrous design; his smaller horns are longer and pointed, and his longer horns have blue accents that replace the original silver base. The helmet reveals more of Garland's face and its eyes are more slit-shaped. His cape no longer covers his shoulders, and his pauldrons are larger and pointed. The first alternate coloration is identical to his "Stalwart's Armor" coloration from the PlayStation Portable Dissidia games. The second alternate coloration darkens his armor black and changes his cape purple, resembling Garland's 20th Anniversary battle sprite (

His first alternate costume, "Hardened Zealot", is an updated version of his original attire while in his "Class Change" EX Mode from the PSP Dissidia games. Garland's white armor and cape symbolizes his time as a heroic knight of Cornelia before his fall from grace. The first alternate coloration of this costume recolors his armor black, and his cape yellow. The cape has a unique pattern on its underside. The second recolors his armor bronze with black accents, and his horns are colored purple. 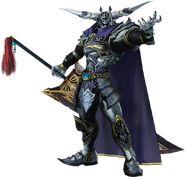 Knight of the Cycle A. 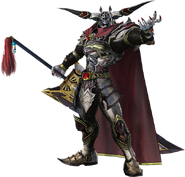 Knight of the Cycle B. 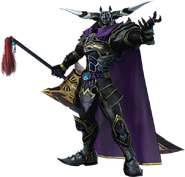 Knight of the Cycle C. 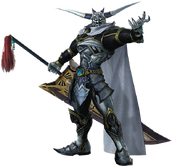 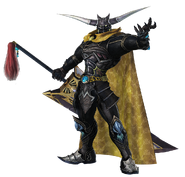 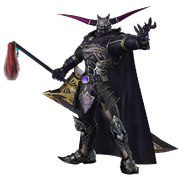 Hardened Zealot C.
Add a photo to this gallery

Garland stays rivals with the Warrior of Light, believing that fate demands that they do battle. He is nonetheless reasonable, accepting Noctis's offer for a truce to put a stop to the planesgorgers. Garland implies that he remembers the original time loop that he instigated by stating "Even though we are no longer bound by time, we are still bound by destiny to fight!"

Garland wields greatswords. All of his weapons, bar Rebellion, which acts as Garland's signature weapon; recur throughout the series and are normally associated with the Dark Knight and Samurai job classes.

His default weapon, Rebellion, is a large decorated purple sword with golden ornaments and accents. Garland's first alternate weapon is the Chaosbringer, a crude black volcanic iron blade with glowing magma running along fissures on its body and surface. It originates from his "Cloudsea Djinn" attire while in EX Mode from Dissidia 012. His second alternate weapon is Balmung, an original sword for Garland said to be a holy knight sword once wielded by him during his days serving Cornelia. It is an enormous double-bladed broadsword accentuated with inlaid metal details, and has a wing-themed crossguard. Garland's third alternate weapon is Zanmato, which has another original design for Garland. The weapon itself resembles Spiritus's greatsword, with the blade featuring more inlaid edges. The wielding portion is decorated with a spiked guard fashioned in the motif of an oni, with the handle wrapped in the fashion of a katana and adorned with a knotted string at its pommel.

Garland has an extra alternate weapon, Claymore, his original weapon used in the PSP games. This was available to players who pre-ordered at GameStop in US territories or purchased Dissidia Final Fantasy NT on day one in European and Asian territories. 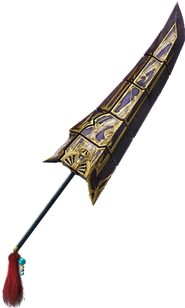 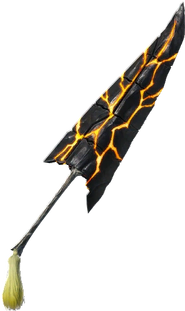 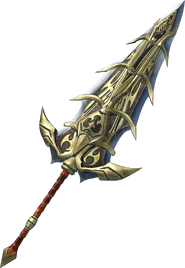 Garland's Claymore.
Add a photo to this gallery

Garland is summoned as a warrior of Spiritus to fight in the new war and is the first to arrive at his tower. When Spiritus communicates with Materia, Garland silently watches as Spiritus declares his intentions to rule World B.

Garland confronts the Warrior of Light in the gateway that resembles Cornelia, and challenges him to a fight. Despite being accompanied by two manikins, Garland is ultimately defeated by the Warrior, Cecil, and Noctis. After the battle, the Warrior of Light asks Garland whether Spiritus's true motive is to destroy the world, and Garland explains Spiritus does not desire that. After confirming that Spiritus is willing to overlook a grudge against Materia for the best interests of their respective worlds, Garland accompanies the three to the god's domain to establish communication with Materia.

Upon arrival, Shantotto initiates the discussion between the two gods. Once Materia and Spiritus come to a truce, the champions on both sides engage in a stage battle to lure out Shinryu, the source of the planesgorgers that threaten to eradicate the world. During the ensuing fight, Garland briefly duels with Noctis and Lightning, before taking up arms against the Warrior of Light. Once the battle energy summons Shinryu, Garland participates in a joint attack against the dragon, but is repelled as Shinryu reveals his true form in a potent burst of power. Once the warriors regain their composure, they work together to defeat Shinryu. Afterwards, the moogles give Garland a crystal to host his memories for Spiritus to use in the new cycles of wars. With a crystal doppelgänger of himself to serve on Spiritus's behalf, Garland is sent home.

Type: Vanguard - By hitting the opponent with consecutive attacks, Garland can receive a buff that stacks up to two times and enhances attack potency while extending the effect's duration.
EX Skill: Deranged Soul - Restrains Garland's target while

is held down. This skill also makes it easier to stack buffs when landing Bravery attacks. 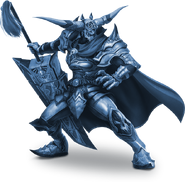 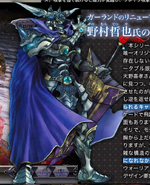 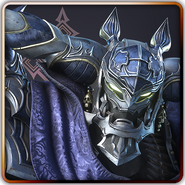