I, Garland, will knock you all down!!

Garland is the main antagonist in Final Fantasy. A former knight of Cornelia who has fallen from grace, the Warriors of Light pursue him after learning he has kidnapped Princess Sarah.

Garland's in-game sprite depicts him in a set of gray armor with a horned helm and blue cloak. His eyes glow red. The Dawn of Souls artwork replaces the blue cloak with a violet one with gold trim, and the helm has two smaller spikes on the top. His battle model also has this appearance.

Garland was redesigned for Dissidia Final Fantasy with Tetsuya Nomura stating it was more like designing a new character because he could only refer to in-game sprites. Garland wears a more elaborate suit of armor with blue jeweled sections on the shoulders, wrists and groin. The horns on the helm extend out farther than they did in Final Fantasy, and his cloak is blue, held by a gold clasp.

Garland is arrogant, evidenced by his declaration that he will knock the Warriors of Light down. In Dissidia Final Fantasy, his personality is expanded, where he has a direct, arrogant and brutal personality with a love of war and conflict. It is implied this lust for battle is his way of dealing with being trapped in the cycles of the gods' conflict. He is obsessed with the concept of endless cycles and believes he has no right to his own will as a prisoner of time.

Garland was the best knight of the kingdom of Cornelia who gained respect through his power and skill. He became corrupted by power and abducted Princess Sarah, fleeing to the Chaos Shrine. He demanded the King of Cornelia hand control of the kingdom to him in exchange for Sarah's life. The Warriors of Light travel to the Shrine where they defeat Garland and rescue Sarah. Afterwards, the warriors travel the world to fight the Four Fiends of Chaos that had drained the Crystals of their power. The power of the Crystals the Fiends had drained was funneled into a Dark Crystal in the Chaos Shrine, opening a portal to the past.

With the Crystals restored, the Warriors of Light are told the Fiends were sent from two thousand years in the past, and their master is in that time. Using the Dark Crystal the Warriors travel to the past and defeat the Fiends again, and find Garland alive. Garland tells the Warriors of Light that the power of the Four Fiends in the present sent him to the past when he was on the brink of death after his defeat, and Garland then sent the Four Fiends in the past to the present. By doing this, Garland has created a time loop that will allow him to live forever.

Garland absorbs the Fiends' power and transforms into Chaos to do battle with the heroes. He is defeated and the time loop is broken, restoring the land. The epilogue states that a restored Garland will await the Warriors of Light as they travel back to the present, though it is unclear if he has reformed into the honorable knight he once was.

Being the first boss, Garland has only physical attacks and the battle is straightforward. The player's physical attackers, if any, should attack each round, with their healer using their spells only when needed and their offensive mage attacking each round with whatever spells they have.

Garland has appeared in the following media throughout the Final Fantasy series:

Garland has made key guest appearances in the following non-Final Fantasy games:

A costume of Garland in his Dissidia Final Fantasy attire appears in Kingdom Hearts Mobile.

Garland is a primary antagonist, where he is actually a good person trying to be evil, and even serves the Light Warriors refreshments when they 'attack' his lair. As the leader of the Dark Warriors, Garland is the longest-running enemy the Light Warriors have faced, although the few evil deeds he attempts usually do not pan out. As most of the character sprites in the webcomic are based on the graphics of Final Fantasy I-III, the sprite used for Garland is edited from a Magic Knight, even using the original graphics of that same class to represent Garland before receiving his "evil" makeover. 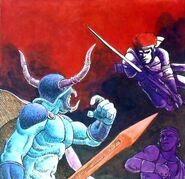 Artwork of Garland fighting the Warriors of Light from Nintendo Power.

Garland, Princess Sarah, and the Warriors of Light.

CG art of Garland from the Collections menu on Final Fantasy Origins. 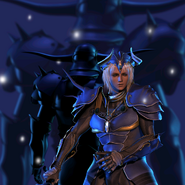 CG artwork of Garland standing behind the Warrior of Light. 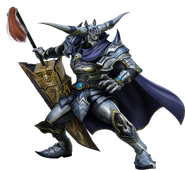