The Gargoyle is a wind-elemental Eidolon from Final Fantasy Dimensions II. It can be obtained as a signet for Wrieg to equip as a first-time completion reward for the "Skeleton Subjugation" side quest in the Ancient Era Black Forest. The signet teaches Wrieg the Shadowbind ability, a useful attack that deals extra damage to undead enemies and inflicts stop. However, aside from its usefulness at the time of its acquisition, the Gargoyle signet is easily outclassed as the player progresses through the game.

In the original free-to-play versions of the game, the signet was similar to the premium version and could only be obtained through the game's summon draw shop.

The Gargoyle is based on the recurring enemy in the series. Its signet artwork depicts the creature as a winged avian-like demon carrying a sword and flail.

The Gargoyle's summon attack is Hurricane, which deals moderate wind-elemental damage to all enemies. Summoning the Gargoyle costs 2 bars from the Summon Gauge.

The following are the abilities Wrieg can learn from the Gargoyle: 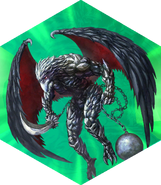 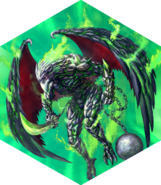 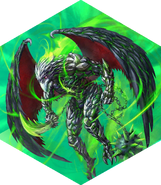 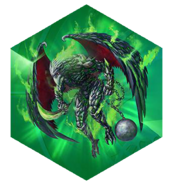 [view · edit · purge]Gargoyles were initially ordinary stone statues built on rooftops to let rainwater above flow down to the ground through certain paths. The statues were usually carved as monsters and strange creatures, which later spawned the belief that gargoyles are the guardians of the buildings they live in.