Gargan Roo is an ancient transport network used on the Mist Continent in Gaia in Final Fantasy IX. It is a network of roots from the colossal Iifa Tree, which flows through underground tunnels. The passengers ride in a carriage that hangs from the back of a giant insect, called the Gargant, that is called by feeding it flowers that resemble large dandelions. The Gargant can be spooked by the monsters spawned by the underground Mist.

Doctor Tot's mansion in Treno contains a secret entrance to Gargan Roo, which he shows the party after giving them the Supersoft. Tot explains the system of levers that controls the gargant's path between Treno and Alexandria Castle.

There is another Gargant tunnel called Fossil Roo, which allows travel between the Mist Continent and the Outer Continent.

Garnet, Steiner, and Marcus arrive at the Gargan Roo to go to Alexandria. While riding the Gargant, the party encounters Ralvurahva that it spooks their Gargant. They arrive at Alexandria where they are arrested. Later, Zidane, Garnet, and Vivi decide to go to Treno when a Ralvuimago intercepts the Gargant on its journey. Though they defeat the Ralvuimago, the Ralvuimago chases the Gargant into accelerating past the Treno Station, crashing and isolating the party at Pinnacle Rocks. After Garnet is crowned the new queen, Zidane, Vivi, Freya, Eiko, and Amarant cross the Gargan Roo to head to Treno.

Down the ladder from Treno, Doctor Tot explains that in order to summon the Gargant the party must find the sequence trigger. Mochos the moogle is found here to save the game.

Through the left passage there are two chests yielding a Chain Plate and a Phoenix Down. Pull the lever at the end of the passage and return to the entrance.

Doctor Tot will explain this form of public transport, and that the gargant will continuously circle the station until it is stopped. One must move to the bottom and interact with the feed, to lower food to stop the gargant. Oglops are seen playing in this area in a cut scene.

Use the switch to release the gargant.

Quina can eat the Dragonfly to learn Matra Magic.

The theme of Gargan Roo is also known as "Ancient Passageway".

A battle background in Gargan Roo.

A battle background in Gargan Roo, when fighting Ralvuimago and Ralvurahva. 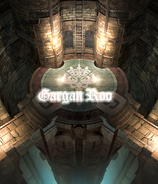 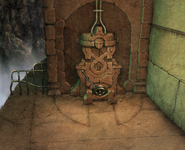 The French word rue, pronounced more or less like "roo", means "street". "Roo" may actually be a variation of "root", as the passages of Gargan Roo were carved out by Iifa roots.