(...Are we locked in? Squall will take care of the rest, right? I wonder if he'll organize the Garden Festival? Nah, can't count on Squall for that...)

The Garden Festival is a student-run event that is believed to be held annually in Balamb Garden in Final Fantasy VIII.

The festival is under dire straits due to the lack of student participation. After the head of the festival committee leaves (as revealed by the Study Panel at the beginning of the game, the previous Garden Festival Committee leader was Wimbly Donner who quit because the committee had no members), the committee is taken over by new student Selphie Tilmitt. An event similar to the Garden Festival may also take place at Trabia Garden, as there is a stage up and running. Galbadia Garden does not appear to have such an event, or at least, no designated area for it.

Selphie is a transfer student from Trabia who joined Balamb Garden to become a SeeD. She takes over the planning for the Garden Festival so she can quickly make new friends, but finds no one is interested. She pesters fellow students to join, especially Squall, the first person she befriends at the Garden. She builds a webpage for the committee to the Balamb Garden intranet, which also hosts her blog and her fansite for Laguna Loire.

Selphie oversees the construction of a stage to the quad area of the Garden, but after graduating as a SeeD is called away to a mission with Squall and Zell. When it is learned Galbadia plans to annihilate Balamb Garden via missiles, Selphie volunteers to lead a team to sabotage the Galbadians' missile base. Unable to stop the launch, Selphie ponders what will happen to the Garden Festival if Squall saves the Garden but she dies as the base self-destructs.

Selphie's team survives the blast by hiding inside BGH251F2, a Galbadian war machine, and she is reunited with Squall's team at Fishermans Horizon. She becomes depressed upon learning that the Garden Festival stage was damaged when the now mobile Garden crashed to FH, but her friend Irvine Kinneas asks the local technicians to restore it, and they move the stage to the middle of the sun panel in FH. Nobody has had time to practice, but Irvine has Selphie and her friends try out difference instruments as they decide to take on the role of the band. Selphie wants the festival to commemorate Squall's promotion to the Commander of Balamb Garden and SeeD, and Irvine wants to organize the festival to act as a match-maker for Squall and Rinoa Heartilly.

Squall and Rinoa attend the festival together and come watch Selphie's band play. They find a naughty magazine left for them by Irvine and have a chance to talk. If Rinoa doesn't like the music, she will argue with Squall. If she likes the music, she convinces Squall to rely on his friends more rather than always handle things alone.

Master Fisherman, a legendary local figure, records the band playing, and if the party meets him later at Shumi Village he will play the music back at them.

Selphie will ask the player to join the Garden Festival Committee if talked to in the screen outside the quad near the beginning of the game, but the player has no obligation to join. Selphie will ask again during the graduation ball. If the player already joined the committee, Selphie will instead wish that the festival will be a success with everyone working hard to make it happen. If the player joined the committee, when Selphie's team is stuck in Missile Base she will wonder if Squall will organize the festival, before deciding that she can't rely on him for that.

At the Garden Festival event at Fishermans Horizon, the player, as Irvine, must decide what instruments will be played for the event. Depending on what four instruments are assigned, a different theme will be played.

If the player chooses a mix of the two themes, the final music will be a cacophony. It doesn't matter who plays which instrument.

During the segment where Irvine has the party choose their instruments, the player can leave the screen and partake in a sidequest as Irvine.

There are three versions of the "date night" between Squall and Rinoa depending on which instruments the player chose. "Irish Jig" gives the "best" conversation, with Squall promising to trust his friends more. If the band plays "Eyes on Me" Rinoa doesn't think the band is the best and argues with Squall. If the player mixes scores from the two pieces, with two instruments each, Rinoa will complain that the music is awful. If the scores are mixed with three from one piece and one from the other, Rinoa will find it hard to understand. Either way, finding herself feeling misconstrued prompts a rejection from Squall. 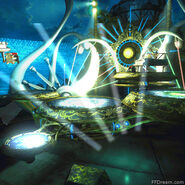