The Garden (ガーデン, Gāden?) refers to the three educational institutions in Final Fantasy VIII. Each trains youths into becoming members of specialized military forces, and is headed by two individuals: an administrator, referred to as master, and a headmaster.

There are three Gardens in the world: Balamb Garden in Balamb, Galbadia Garden in Galbadia, and Trabia Garden in Trabia. Occupants of one's Garden refer to their home Garden as simply "Garden", while the other establishments are often referred to with shorthand with the Garden's first letter adjoined to the word "Garden": B-Garden, G-Garden, and T-Garden.

The Garden Code is drilled into each student among text-based lessons. It is a series of articles that informs the student on possible actions during a given situation.

8:7... In the event that returning to the assigned Garden is not possible, report to the nearest Garden). 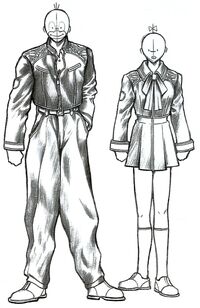 Gardens require students to wear cadet uniforms for formal occasions or external operations where the Garden is represented. The uniforms of each Garden are in similar design with patterned shoulder pieces and silver linings. The Garden logo appears partway down the right sleeve. The main difference between the uniforms is the color: Balamb Garden's consists of a navy blue base with yellow accent, Trabia Garden's a light blue base with purple accent, and Galbadia Garden's black base with red accent.

Upon graduation, SeeD members receive their own formal uniforms. 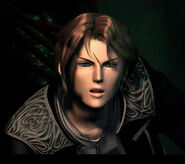 View of the shoulder design.

Children between the ages of five and fifteen may apply to become a cadet. To become a student, one must pass an interview. Students are allowed stay with their family and commute, or live in the dorms. Cadets take classes in general education, athletics, combat, magic, and (in Balamb Garden) Guardian Force use.

When cadets turn fifteen, they may attempt to become SeeD. Students from the other Gardens can transfer to Balamb to take part in the SeeD field exam after completing the written exam in their home Garden. Students have until age twenty to pass the SeeD exam before they are required to leave the Garden.

The Garden staff responsible for the administration and overseeing conduct and ethics are known as the "Faculty". Each Garden has a set of faculties with different uniforms; Balamb Garden's is dressed in white and red robes with a yellow, face-covering headgear; Galbadia Garden's in tracksuits; while Trabia's in standard military garb.

Faculty classification systems within the Gardens mainly follow that of a standard real-world school.

All Gardens support a program that helps graduates enlist in armies all over the world. This program was created by Martine, the Galbadia Garden's headmaster. 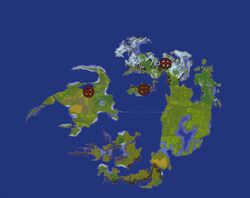 One day, Edea began talking about building the Garden and training SeeD. I became obsessed with that plan. But I was very concerned with SeeD's goal, that one day SeeD might fight Edea...She laughed and told me that would never happen.

Cid Kramer on the founding of Garden

The idea of Gardens was brought up by Edea Kramer, who had met a teenaged Squall Leonhart from the future, claiming to be a SeeD from the Garden. A dying sorceress had appeared alongside him, and Edea, a sorceress herself, had inherited her sorceress power as she had perished. From this encounter Edea surmised that one day Squall—a boy currently in her orphanage—would defeat a sorceress, and she would need to ensure he will be trained to become a SeeD.

Cid Kramer, Edea's husband, began seeking beneficiaries for financial support. The Shumi NORG gave major contributions into building the first Garden, Balamb Garden. The facility itself was built by the technological masterminds of Esthar[note 1] on a defunct Centra shelter, and was placed on the small central continent of Balamb.

The Garden buildings were initially Centra shelters before being remodeled into Gardens. The people of Centra used to travel the world on the shelters after a Lunar Cry devastated their homeland. The Garden's MD Level is where the control system for the shelter is located, where the oil stratum fuels the system that moves the Garden. The original structures are left intact, but entry to MD Level is strictly forbidden.

Balamb Garden is administrated by NORG as its master with Cid Kramer as its headmaster. Due to the funding needed to run the Garden, NORG suggested dispatching the SeeDs around the world as mercenaries. After some time, Galbadia Garden and Trabia Garden were also built. Galbadia Garden's master is Martine, who is also the headmaster—until Edea, under control of Sorceress Ultimecia, takes over. The headmaster of Trabia Garden is never revealed.

Balamb Garden was built to train Squall and other orphans to become SeeDs in preparation for their fated battle against the sorceress Edea had glimpsed with a future Squall. Dr. Odine of Esthar had developed a system to use Guardian Forces, which lets the SeeDs and the cadets junction magic to augment their strength, as well as summon the GFs in battle. Balamb Garden is the only Garden to train SeeDs and the only one to use Guardian Forces. Galbadia Garden students are the only ones to wield firearms and the Garden cooperates with the government of Galbadia. What Trabia Garden specializes in is never elaborated upon, but its cadets can transfer to Balamb to take the SeeD field exam to graduate to SeeD, but afterward they must remain stationed at Balamb Garden.

Edea, who had stayed estranged from Cid and of whose role as the Garden's originator its students are unaware of, surfaces in Galbadia where she is to become President Vinzer Deling's ambassador to intimidate other nations. Squall graduates to SeeD and is sent on a mission to assassinate her. Cid has deemed the time for the Garden's true purpose having finally arrived, although he is dismayed the sorceress the SeeD appears to be fated to battle is his wife.

The assassination attempt fails. Edea dispatches of Deling and takes over Galbadia Garden as her base of operations and orders Balamb and Trabia Gardens destroyed via missile strike. Trabia Garden is annihilated, but Balamb Garden escapes as Squall's party races back to warn them in time to activate the shelter mechanism the Garden was built upon. The transformed Garden moves away from the spot the missiles were programmed to target.

NORG considers Balamb Garden his personal business venture, and deems Cid has usurped power and tries to overthrow him. NORG doesn't believe the Garden stands a chance against Edea, and though the Garden had escaped the missile strike, NORG wants to hand over Squall's party to her as an act of goodwill and to show the Garden is not associated with the attempt on her life. When Squall's party protests, NORG is defeated and he and the Garden Faculty are driven from the Garden.

Once the Garden crashes into the Fishermans Horizon, the former Estharian engineers, who had built the city to the middle of the ocean, restore Balamb Garden to full functionality. Cid steps down promoting Squall as the new commander of SeeD. He embarks on a quest to defeat Edea, though he doesn't understand why Cid calls it his destiny. During their travels they uncover Edea's true identity. When attempting to seek answers at her old orphanage, they are intercepted by a similarly mobile Galbadia Garden commandeered by Edea and her sorceress' knight, Seifer Almasy.

Squall leads the attack into the heart of the enemy Garden where they confront Edea. After the battle she addresses the party in kindness to everyone's surprise. As Seifer departs with the Galbadians, having received new orders from a possessed Rinoa Heartilly—Squall's party member who has since fallen comatose—Edea and the others retreat to her old orphanage. Edea reveals she had not been acting on her free will: she had been possessed by a sorceress from the future called Ultimecia who wants to unmake the world via time compression.

Squall decides to quit SeeD and pursue a personal mission: finding a cure for Rinoa, who unknown to everyone had inherited Edea's sorceress power and become possessed by Ultimecia. Galbadia Garden is never seen again, and Squall leaves Balamb Garden docked at Fishermans Horizon as he and his friends set out to Esthar on foot. It is unknown who replaces him as the Garden's commander while he is away.

Squall's quest leads him to traveling to the future where he kills Ultimecia and stops the time compression. As the timeline begins to unravel to its original form, Squall briefly appears back at Edea's orphanage. He imparts the knowledge of SeeD and Garden to the younger Edea before being taken to his own time period. Everyone returns to Balamb Garden where they celebrate the SeeD's victory over Ultimecia, with Edea and Cid attending as well. 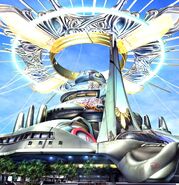 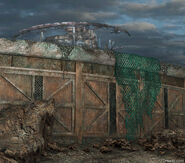