Cid Pollendina: Oh, shut up and help me remodel the Garamsythe Waterway (Final Fantasy XII) page!
Please expand this article into a full one. The following tasks need to be completed:

Hey, lock this place up for me, will you? If Migelo finds out we've been down here, he'll tan our hides.

The Garamsythe Waterway is a location in the land of Ivalice in Final Fantasy XII. It serves as the sewer system for Rabanastre. The Garamsythe Waterway spans the underneath of the city, and is accessed via Lowtown. After the Esper Zalera is defeated deep within the Barheim Passage, a zoning point to the waterway becomes available.

The waterway is a labyrinth of water and passages with monsters roaming the pathways. The water's level can be adjusted to reveal lower pathways through the opening and closing of the sluice gates.

Because the waterway is of water terrain, all Water and Lightning attacks deal 20% more damage than normal, and Earth damage is halved.

An underground waterway running deep beneath the Royal City of Rabanastre. Built and rebuilt over the centuries, no one alive knows all of its labyrinthine ways. Some are said to lead even to the royal palace. There are stairs leading down to the waterway in Lowtown, but they are normally barred to keep unwelcome visitors down in the sewers where they belong.

In the manga version, Princess Ashe and Lord Rasler fell into the waterway through a weak spot in a closed-off section of the Royal Palace of Rabanastre after Ashe spied on a Neo-Rozarria Faction meeting conspiring to kill her father, King Raminas B'nargin Dalmasca. Learning Rasler is not part of the faction, Ashe treated the wound he sustained when jumping in after her, but as it still smarted Ashe took his sword and led the way back to the palace.

Some years later, Vaan's adventure begins in the Garamsythe Waterway where he is hunting for rats until Kytes fetches him for Migelo. Vaan asks Kytes to lock the place up, because he does not want Migelo to discover he has been in the waterway. Vaan later enters the waterway having heard from Old Dalan it holds a hidden entrance to the Royal Palace. He is not the only one, as the Resistance moves their troops and supplies via the waterway to strike the palace on the night of the fete, the effort being led by Vossler and Amalia.

While in the palace Vaan runs into two sky pirates, Balthier and Fran, and they crash into the waterway as the piece of nethicite Vaan stole from the palace drains the power from the sky pirates' hoverbike. Escaping from the Imperial troops through the sewers, they come across Amalia and team up with her. After battling the Firemane the group is cornered by Rabanastre's new consul, Vayne Solidor, and separated, Amalia taken by the Empire and Vaan and the sky pirates thrown into the Nalbina Dungeons.

The manga version expands on the events. Vaan forms a temporary alliance with Balthier and Fran to escape the waterway during the Resistance attack on the palace. Vossler realizes the insurgence was led into a trap and orders a retreat, but Ashe, accompanying him under the alias "Amalia", refuses to admit defeat. Vossler orders Ashe taken to safety through the Garamsythe Waterway, but the troops he sends with her are imperial informants and aware of her identity as the Princess of Dalmasca.

Ashe fights them off but is saved by Vaan. Vaan, Balthier, Ashe and Fran are met with a force of imperial soldiers with the insurgent traitors when a Firemane attacks them. Judge Ghis, who was appointed by Vayne to oversee the imperial counterattack, saves the insurgent traitors and defeats the Firemane, ordering the insurgents to take him to Ashe. The party defeats a second Firemane after which Ashe introduces herself as "Amalia" when Ghis finds them. Vaan attacks him and is thrown aside, and Balthier tells him Ghis is a Judge Magister who works for House Solidor. With Vaan knocked out and Ashe held captive Balthier and Fran fight Ghis, but are outmatched. Vaan, Fran and Balthier are sent to the Nalbina Dungeons, while Ghis has Ashe taken away aboard Dreadnought Leviathan.

The waterway contains multiple treasures, but in the original version they are mainly common items and low level equipment, unless they have gil. With the Diamond Armlet equipped, the treasures contain Knots of Rust as a common item, and Elixir or Hi-Ether as a rare item.

When Vaan is on his way to the palace, he passes through the North Spur Sluiceway. In the original version, it is possible to obtain two weapons here. Oak Staff in a treasure right in the middle of the area that spawns 65% of the time, has 70% chance to contain items instead of gil, and when it contains items it can be either the Oak Staff or a Potion. The treasure respawns. Right before the stairs leading up toward the palace there is a treasure that spawns 65% of the time, and when it contains an item, it yields a Mage Masher.

In the Zodiac versions, the treasures are different. No. 4 Cloaca Spur (Drained) has the useful Achilles technick. 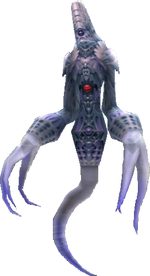 The Wraith hunt can be undertaken after escaping from the Barheim Passage. It is found in the Overflow Cloaca area and will constantly cast Doom on the party. Its petitioner is Milha in Rabanastre's Lowtown. Defeating Wraith allows the player enter a private residence in Lowtown and pick up the Dusty Letter key item, part of a later sidequest (see below) that tells in which order the sluice gates must be operated in the waterway.

The White Mousse is a Mark whose hunt can be undertaken after the player attains the clan rank of Vanguard. White Mousse is a breed of Flan that lives in the West Sluice Control area of the Garamsythe Waterway. The Sluice Gate Key can be obtained from Sorbet after completion of the hunt.

Orthros is an Elite Mark located in the Garamsythe Waterway, in the Southern Sluiceway. The earliest the hunt can be accepted is after obtaining the Dawn Shard, and reaching the clan rank of "Headhunter". Orthros will appear if the party consists of the three females. The player can swap the characters after Orthros appears. Guest characters, Larsa and Reddas, can be in the party as well. It is petitioned by Contrite Thief in Rabnastre's Lowtown (North Sprawl) after learning of the hunt from Montblanc. The player will receive the Stolen Articles after the battle, which the Contrite Thief returns to Samal. He comes by to give the player a Blackened Fragment, which is part of the three medallions sidequest.

The Gavial is a Trophy Rare Game that appears in the No. 10 Channel. Since it is a trophy monster, it will only spawn once the trophy quest has started and never spawns again when killed. The player must have spoken to the "Huntmaster" in Phon Coast and defeated Thalassinon, which will trigger the start of the Rare Game quest.

The player must close the no. 10 sluice gate and enter the area drained of water. Gavial is not found on one of the upper walkways, but down in the channel. After waiting 10 to 15 seconds, Gavial will come running towards the party.

Razorfin has a 10% chance of spawning instead of an Ichthon in the North Spur Sluiceway. It can be picked out from the Ichthons around it because it is larger and not docile.

The player must spend at least five minutes in the No. 4 Cloaca Spur after which the chances of the Drowned spawning increases by 8% every 15 seconds. The player should have drained the water in the No. 4 Cloaca Spur. One must enter the lower level of the southeast area, near to the Gespenst. If it has not appeared after eight minutes, it will not appear, so the player must re-zone and try again.

After defeating the White Mousse mark the player gets the Sluice Gate Key that allows them to work the gates in the opening area of the waterway.

The Dusty Letter Key Item contains a clue to obtaining the Dull Fragment - "East Southeast East Southwest Southeast". The waterway controls in Central Waterway Control must be operated in this order.

The player must first turn all the switches off (turning the lights off) and follow the steps below:

After the last gate is closed a click is heard, and on the south side on the ground, there is a glittering object, the Dull Fragment. This item is part of the three medallions sidequest.

Now only sluice gates No. 3 and No. 4 should be on and the player can access the area where Cúchulainn is fought, although the player must be quick because he disappears exactly 75 seconds after the player has pulled the switches.

Different enemies appear in different areas determined whether the areas are flooded are drained. Thus, the player can spawn new enemies at the waterway after they get to operate the sluice gates.

The Garamsythe Waterway appears as a portion of the Royal City of Rabanastre raid, as part of the Return to Ivalice series. Stretching far below the streets of Rabanastre, this channel was constructed to carry in water from its source in the Skatay Range to the north. The lattice-like architecture of the waterway is confusing to navigate, and those who lose their sense of direction find it all but impossible to find their way out again. Within its depths are the ruins of Lesalia, ancient capital of the legendary kingdom of Ivalice.

It is also known to connect to Nalbina Fortress and the ocean. 30 years ago, Princess Ashe and Ba'Gamnan fled Nalbina after the Garlean Empire conquered it, but Ashe died "a stone's throw from where the waterway drains into the sea."

Vaan has snuck into Rabanastre Palace, where he meets a dashing man and his viera partner. The two help Vaan escape on their airbike before careening down to a crash landing in the Garamsythe Waterway.

"The Garamsythe Waterway" plays as the location background music. At the game's beginning where Vaan and Kytes are training in the sewers, the theme "Secret Practice" plays.

The map can be found in the East Waterway Control.

The candle to reveal the full map can be found in the East Sluice Control. 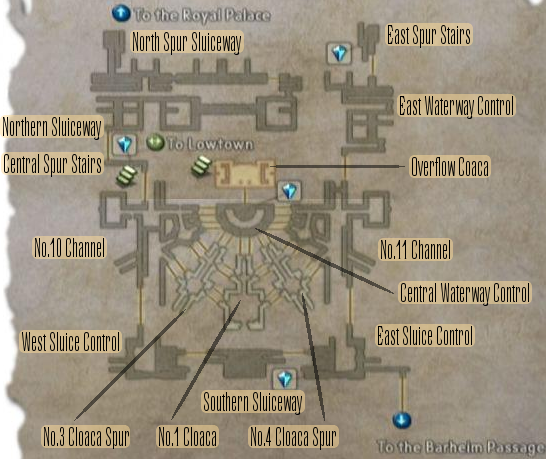 After Fran and Balthier join Vaan's party and Balthier explains the gambit system, the player can examine the fallen soldiers in the canal. Depending on who is in the lead, the message is different:

Vaan: "I'd take you with us if I could...but there's just no time. Sorry..."
Balthier: "They're equipped well enough, for all the good it did them. Boys with too much hate and too little experience. The insurgence must be desperate."
Fran: "If they had allies who fled into the sewers, their pursuers will not be far."

Vaan hunts rats in the waterway.

Resistance forces hiding in the sewers.