The Gambler (ギャンブラー, Gyanburā?), also localized as Lady Luck, is a recurring job in the series. As their names implies, Gamblers rely on chance and luck in battle. Their abilities consist of random effects that are extremely powerful when successful, but detrimental if unsuccessful. Gamblers use unorthodox weapons associated with gambling, like dice and playing cards. Their trademark ability is Slots, which allow them to pull slot wheels to initiate attacks based on the results.

Setzer's job was removed from the North American Super Nintendo version. In the Final Fantasy III Nintendo Player's Guide, his job is given as Gambler. The English Game Boy Advance version retains the job titles and Setzer is a Gambler. His weapons consist of dice, cards, and darts, and his special ability is Slot.

Though characters have no specific job classes, Selphie has the Slot command as her Limit Break. The command does not actually involve slot wheels in the command, instead, Selphie cycles through a random list of spells and numbers, performing the chosen spell the specified number of times when the player executes the command.

Wakka's Overdrive consists of him spinning three slot wheels. Depending on how many symbols the player lines up, and which type of Slots command is being used, Wakka attacks one or more enemies, the results affecting which elements and status effects the attacks take on, and how many times Wakka attacks.

The Lady Luck dressphere (known as "Gambler" in the Japanese release) can be first obtained in Chapter 3 as a prize from the Sphere Break tournament. It is otherwise obtainable in Chapter 5 if the player lost the tournament. The Lady Luck's abilities rely on chance to deal out various effects in battle.

Corsairs are obtained through a difficult sidequest. Their abilities generate random numbers between one and six (corresponding to rolling a die), and various effects can be activated depending on the results.

The Party Host crown is obtained after defeating Rolan in Spelvia. It specializes in abilities that Psych Up up the party. Its second to last ability, Pot Luck, works similarly to the gamblers' Slots command in other Final Fantasy games, calling for random effects to happen that may be either beneficial or detrimental. Its Japanese name, (遊び人, Asobinin?), is an alternative word for Gambler.

The Gambler class can be unlocked by completing all the quests in the Moore Region.

The Gambler appears on a gold card. 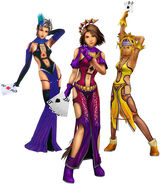 (Bakuto, 博徒?) were itinerant gamblers in Japan from the 18th century to the mid-20th century. They were one of the forerunners of the modern Japanese crime gangs known as yakuza. Bakuto plied their trade in feudal Japan, playing traditional games such as hanafuda and dice. They were mostly social outcasts who lived outside the laws and norms of society.