Knights of the Round

Knights of the Round

Galuf's memories return at the sight of his beloved granddaughter, and his duty with them. When he fails to prevent Exdeath's revival, this proud old soldier is overcome with regret, eventually ending up back in his own world...

Galuf appears as an unlockable character, and is obtained by collecting Silver Crystal Shards. His appearance is based off one of his artworks by Yoshitaka Amano, in which he dons gauntlets on his arms as opposed to his red gloves.

Galuf is an excellent choice for both field and battle stages, as he can take damage for the party while also increasing their HP and stamina, but can also be effective in battles thanks to his high strength, and that he is one of the few characters that can naturally summon the Knights of the Round, which is the most powerful summon. Keep in mind that boosting Galuf's strength comes at the cost of expending the party's overall HP gauge, so choose strategically as to what Galuf's setup should prioritize.

Type: Stamina
Summon: Knights of the Round 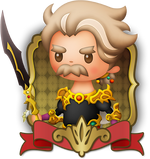 Galuf is an unlockable character obtained by collecting Light Crystal Shards, after Lenna has been obtained.

Type: Stamina
Summon: Knights of the Round