None
List of Gallu
Gallu is a genus of enemies in Final Fantasy XI.

Even the ordinary attacks of these huge monsters are considered to be special attacks, hitting one target three times or hitting multiple players within range for damage plus Stun or Bind effects. Not only that, but gallu often have one or more jobs and are capable of using their jobs' special job ability. 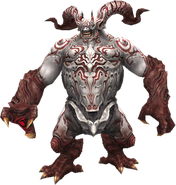 Samursk
Add a photo to this gallery

In Sumerian and Akkadian mythology, the Gallu or Gallus were great demons/devils of the underworld.

This section about an enemy in Final Fantasy XI is empty or needs to be expanded. You can help the Final Fantasy Wiki by expanding it.
Final Fantasy XI
Retrieved from "https://finalfantasy.fandom.com/wiki/Gallu?oldid=3239932"
Community content is available under CC-BY-SA unless otherwise noted.