Cid Pollendina: Oh, shut up and help me remodel the Galka page!
Please expand this article into a full one. The following tasks need to be completed:This request can be discussed on the associated discussion page. Remove this notice upon completion.

Various
Galka are one of the Enlightened Races available for play in Final Fantasy XI. They are large humanoids with a vaguely ursine appearance. They appear most commonly in Bastok, and Galkan players are rewarded for starting their games there with a Bastok Ring. They are strong and have high HP, making them best suited for melee classes, such as monk or warrior.

Despite their average magic attack ratings, Galkas have low MP pools and may struggle at magic when compared to other races. There are, however, various types of armor to compensate for this. They reproduce through a form of reincarnation, but usually have no recollection of their past life. Many English-speaking fans believe they are asexual due to a mistranslation in the manual. Interviews with the game's creator have confirmed they are male.[citation needed]

The details of Galkan reincarnation are not known. Elderly Galka will go into seclusion, and upon their death are enveloped by a bright light. Some time later, a Galkan child will be found wandering into a town or village. Only the Talekeeper, who serves as the spiritual leader of the Galka, can recollect not only his own past life, but those of all Galka over the past 200 years.

The Galka were the first among the enlightened races to create a civilization: the desert kingdom of Altepa, on Zepwell Island. 600 years prior to the events of Final Fantasy XI, the Antica attacked Altepa, destroying the city and massacring its population, forcing the survivors to flee to what is now Bastok through Korroloka Tunnel. The Galka feel they are exploited by the Humes of Bastok since their primary employment is as manual laborers, mainly in the nearby mines. Some Galka resent their "given name", generally a descriptor not unlike the names of Native Americans, such as Invincible Shield, though such names are just as likely to be honorific as derogatory. These are the main factors contributing to a growing discontent among the Galka toward the Humes.

The following table shows the level 1 statistics for each class a Galka can take, keeping in mind that the difference in attributes between each race is quite negligible, and any of them will be able to do any job competently as long as they are geared well: 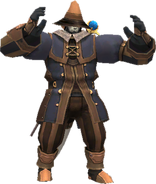 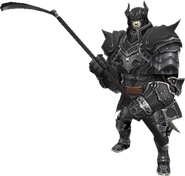 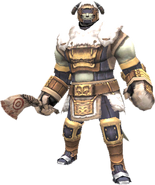 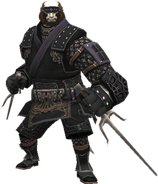 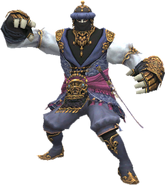 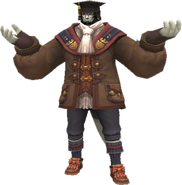 The Galka is one of the playable races.

The Galka character design was done by Nobuyoshi Mihara.

During the time frame of Final Fantasy XI, the Talekeeper is named Gumbah and is vital to Hume-Galkan relations. The game's primary antagonist, the Shadow Lord, was also once a Galka Talekeeper. 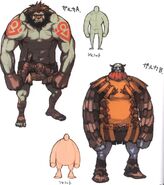 Early concept art of the Galka.

Early concept art of the Galka. 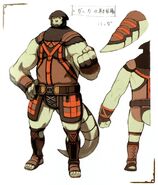 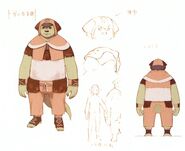 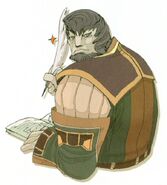