Wind damage to one enemy.

Galestrike is a Ravager ability and deals wind-attribute physical damage to a target. It has an ATB cost of 1 and a modifier of 1.05. It can be learned by Serah (level 25), Noel (level 13), Apotamkin (level 13), Blue Chocobo (level 9), Buccaboo (level 19), Fencer (default), Lightning (default), Spiceacilian (level 3), and Vespid (default).

Galestrike is also a Shaman ability for Lightning in the "Requiem of the Goddess" downloadable content scenario. It is learned at level 1 and has an ATB cost of 1. It inflicts wind-attribute physical damage on the target.

Galestrike is a physical-type ability dealing wind-attribute physical damage to a target. It has an ATB Cost of 15, Multiplier of 0.40, Stagger Power of C, Stagger Time of E, and a Combo of 5.

Oerba Yun Fang uses Galestrike to opponents weak against wind when she is a party member.

This section about an ability in Final Fantasy World Wide Words is empty or needs to be expanded. You can help the Final Fantasy Wiki by expanding it.

Galestrike is a special ability that allows the user to inflict wind physical damage (1.4x) to a single enemy. It costs 7 MP to execute and can be learned by Lightning (level 26 (6★)). 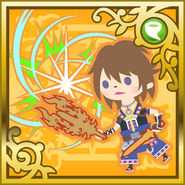 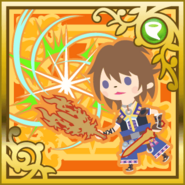 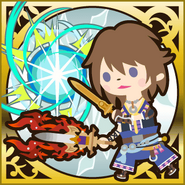 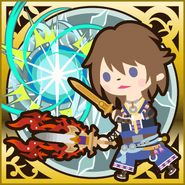 This gallery is incomplete and requires Lightning Returns: Final Fantasy XIII added. You can help the Final Fantasy Wiki by uploading images.