Cid Pollendina: Oh, shut up and help me remodel the Galebreak page!
Please expand this article into a full one. The following tasks need to be completed:This request can be discussed on the associated discussion page. Remove this notice upon completion.

Galebreak is a location in Final Fantasy Brave Exvius. Built at the base of a mountain, the checkpoint guards the passage to the Wind Shrine, enclosed by tall mountains on all other sides.

After exiting Dilburg Mine, the party passes through Galebreak. Lid tells the trio that the Wind Shrine is just beyond the barrier, and Lasswell guesses that surely Veritas of the Heavens is waiting for them there. Rain tells Lid that she doesn't need to involve herself in the fight, so she just can go grab the crystal she needs for her latest work, but she says they have to take Heavenlord on together as she too wants to find out he is. They manage to defeat Typhon, a legendary monster that attacks airships that all techinicians know about.

When they reach the checkpoint itself, they find the soldier killed and hear as Heavenlord's taunts. Rain says it is enough, but Heavenlord says they should look to the heavens with awe. Rain calls him a coward and dares him to show himself, incensed at the 'butchery' he has just witnessed, but Heavenlord ignores him and continues his journey to the shrine. Lid then understands why the trio is on their journey and joins the party. Lid tells Rain to pull himself together and the party resumes their journey.

Galebreak - Beast in the Storm

Defeat a typhon with a limit burst 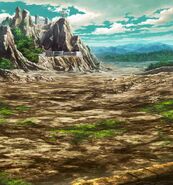