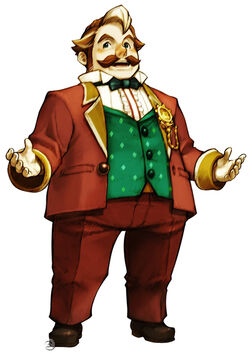 Mayor Gale Rosage is a character from the Chocobo series, appearing in two of the games.

As the leader of the townspeople of Lostime, Gale is well-versed in the town's history—if only he had not forgotten quite a bit of it. Some time ago he served as the town's Oracle of Water. He speaks of forgetting as a virtue and encourages Cid, Shirma, and Chocobo to join him in forgetting.

After Raffaello's egg falls from the sky, Mayor Gale 'remembers' Raffaello's name. After hearing the Bell of Oblivion he forgets his own name. His Memory Dungeon is the first Memory dungeon Chocobo goes though to save Raffaello. Mayor Gale contradicts his own preaching and says it's good to remember some things.

After the Destroyer is defeated, Mayor Gale acknowledges the importance of memories and renames the town to Foundtime. If Chocobo visits his house, a new book written by the mayor will be on the table, featuring a dedication to the town's past warriors.

Mayor Gale is one of Cid's Castle's guards along with Stella. He isn't a major character, but seems to be a good friend of Cid.

Gale is voiced by Sean Chiplock in the English version of Chocobo's Mystery Dungeon Every Buddy!.

The Chocobo series
Retrieved from "https://finalfantasy.fandom.com/wiki/Gale_Rosage?oldid=3210588"
Community content is available under CC-BY-SA unless otherwise noted.