My beloved wife and children. The anger of false gods is still to be feared. When the time is right I shall send for you. Until then you must wait. Be patient. Remain strong. We shall be united in the heavens above Ivalice.

Statue Inscription in the Glabados Ruins

The Galbana is the party airship and main mode of transportation in Final Fantasy XII: Revenant Wings.

A unique airship that can run without a skystone or glossair rings, the vessel acts as a mobile headquarters for Vaan's sky pirate party as they travel across the skies of Ivalice and Lemurés.

The back section of the airship contains a bazaar where many of the crew and refugees gather. Some, like Cu Sith, set up shops. The moogle Nono is in charge of the ship's maintenance.

After Vaan's new airship is destroyed at the Glabados Ruins he, Penelo, Kytes, Filo, and Tomaj are stuck in Rabanastre. They hear reports of a derelict approaching the city outskirts, and despite Penelo's warnings, Vaan, Filo, and Kytes set out in search of it.

After a night-time trek through Rabanastre, they exit the South Gate and find the derelict airship waiting, the Dalmascan guards distracted by another band of "intruders". Vaan and co. decide to hijack the mysterious airship, and after skirting several Dalmascan guards and strange new enemies called Yarhi, the trio board the ship.

Once aboard the Galbana, the party must fight several battles against Ba'Gamnan's clan to gain control of the ship.

Ba'Gamnan's siblings, Gijuk, Rinok, and Bwagi, flee the Galbana after being defeated, leaving Ba'Gamnan alone on the derelict. Vaan, Filo, and Kytes head for the bridge, and Ba'Gamnan's pursuit is stopped short by the airship's sudden rumble. Penelo and Tomaj enter the bridge, only having a few seconds to take in the scenery when the Cache of Glabados auracite Vaan had received from Balthier reacts with the shining blue light on the bridge.

The airship takes off, spreading its wings and shattering the dense cloud of dust that had gathered around it before its journey to Rabanastre. The Galbana ascends into the skies and passes through a mist-like layer of red and yellow lights, breaking through and reaching the sheltered Purvama of Lemurés, all on auto-pilot. The new hosts are given the opportunity to name their new airship and the first place the Galbana explores is the Bosco Pampa on Zephyr, the Windward Isles.

The party uses the Galbana to explore the floating isles of Zephyr, Tormelados, and The Muruc Cahuac Skysea. After the events with the Judge of Wings in the Underfane of Yaxin Qul, Bahamut rends the Skysea into multiple islands, and the party barely escapes on the airship. The Galbana is damaged as a result of Bahamut's fury and crash-lands on Tswarra.

Though Tomaj repairs the ship the Galbana refuses to take flight while the relationship between Velis, a lone Dalmascan knight discovered in the area, and Penelo grows and Vaan simmers in rage. Only after the nighttime events at Tomaj's Camp and Velis's defeat, does the airship "agree" to lift off from the rainforest isle. It was revealed Velis was but a manifestation of the real Velis's anima, his true name sake having perished in the war against Archadia.

Upon the party's return from Lesrekta, Isle of Illusions, they find themselves in the Sky Saloon. Balthier and Fran are on-board, along with the rest of the crew. After learning the truth about the auraliths and how they sap the aegyl from their anima for use by the aegyl god Feolthanos, Vaan and company are alerted of the approach of aegyl forces. Upon the return of their anima from the shattered auraliths, the aegyl's first feelings are those of rage and revenge against those from the "underworld," and they attack the ship with a fleet of airborne Yarhi.

The party learns origins of the Galbana upon returning to the Glabados Ruins. Upon reaching a previously hidden chamber, the party comes upon an elaborate winged statue that explains the ship's purpose. Before the aegyl's exodus to Lemurés, the aegyl's leader Feolthanos had relations with a viera, which resulted in a new breed, the "Feol Viera". Since his children did not have wings, Feolthanos was forced to leave Ivalice without them.

Feolthanos constructed the Galbana as the means of transporting his stranded offspring to Lemurés. The Galbana failed to accomplish this task in a timely fashion, perhaps because the feol viera had been banished from the Wood and taken refuge in the dark reaches of the Feol Warren. Feolthanos surrendered a piece of his anima in the auracite that would bring the Galbana to life, and thousands of years after its creation, the airship sensed Mydia, who had fled from the Warren. It took her to the Sky Continent where she was reunited with Feolthanos and transformed into the Judge of Wings. It seems as if Mydia's new teleportation powers rendered her use of the Galbana obsolete, for the airship left her and returned to Ivalice, attracted to the piece of auracite Vaan had obtained from the ruins.

The Galbana serves Vaan and the party well, taking them to the Keep of Forgotten Time via the newly discovered pathway, Eternity's March. After Feolthanos's defeat within the keep, his rule ceases, and the last of the auraliths shatters. Without the auraliths' sustaining power, the Purvama of Lemurés begins to crumble.

The Galbana, sensing the loss of its creator and homeworld, takes off, leaving its crew behind. Tomaj and Nono bring Balthier's airship, the Strahl, to the Gates of Shattered Time, which Vaan and company board. Standing on the roof of the Strahl, Vaan and his friends wave goodbye to the dissolving world of Lemurés. Llyud decides to lead his people to new heights, and the Galbana soars without a pilot into the unknown blue skies, its future and destination a mystery.

The Bridge is the first accessible portion of the Galbana. The cockpit is located in the front, with a slot for the auracite found at the Glabados Ruins set in the middle. Flanking the bridge to the right are the Notice Board and the Logbook.

The Notice Board is where Tomaj and Larsa pin up notices for missions the party may sign up for. The Logbook near the auracite slot hosts a variety of information, including data on completed missions, Recipe Books, a Folio that serves as a sort of encyclopedia, and a collection of log entries.

The Sky Saloon is housed in the back portion of the Galbana and serves as a rest area, both for the player party and for a variety of guests that join as the game progresses. The area is wide and open, and the hull is made entirely of glass, affording a spectacular view of the passing skies. Most of the floor is also of glass, giving the impression of standing on air. In addition to serving as a "town hall", the Sky Saloon is also a shopping center, with four shops in the corners of the area.

As more items from the Sky Saloon are purchased and its vendors' quests are completed, the shops will be steadily upgraded from market place stalls to full store buildings. The Sky Saloon can also be decorated with Memento ornaments like flower gardens, statues, fountains and crest through the completion of certain prerequisites.

Mission 05: The Treasure is the Key[]

The interior of the derelict is no more inviting than the desert outside. As Vaan and the others battle within its fantastic confines, the Cache of Glabados begins to glow.

This mission explains the purpose of Summoning Gates. After overcoming a group of Yarhi, Vaan captures the gates and learns to harness its summoning powers to swell his own forces.

With the Cache of Glabados in hand, Vaan and his friends explore the derelict's interior. Meanwhile, Penelo mistakes trouble outside the ship for Vaan's work. Who's really behind it?

This mission occurs immediately after Mission 06, and is the last in the series of missions to claim the Galbana. Vaan, Filo, and Kytes fend off the intruding Ba'Gamnan and his gang using the newfound powers of the Yarhi.

Returning from the World of Illusion, the party is greeted by none other than Balthier. Their disagreements set aside, they soon encounter a group of Aegyl rebels encircling the airship.

The deck of the Galbana is the setting for this battle. Ansei, Llyud's former comrade, leads several rebels in an assault on the airship.

In order to reach most places on Lemurés, the airship must first be hovering over a area with an arrow pointing downwards. On these spots the Galbana can descend to the earth, and the party members exit the airship to walk to the locations on that particular island.

One disembarking point exists on each of these islands: Zephyr, the Windward Isles, Tormelados, Isle of the Megalith, the The Muruc Cahuac Skysea, and Arda, Heaven's Pillar. After Bahamut breaks the Skysea into a series of islands, three disembarking points will exist on three different islands. As shown by the landing points of the Bosco Pampa and the Muruc Cahuac Skysea, the Galbana is capable of making water landings and exits.

After the flagship Leviathan appears in the skies of Lemurés, the Galbana can approach it in order to travel to Ivalice, and vice versa. When visiting areas of Ivalice, there are no disembarking points; instead the Galbana can only visit specific locations, such as the Paramina Rift. This is reminiscent of Final Fantasy XII and rules out the possibility of exploring the world of Ivalice on foot.

The last gateway for the Galbana is Eternity's March, which leads to the Keep of Forgotten Time.

Besides the shop owners, a number of other beings will eventually reside within the Galbana. After rescuing several aegyl from cruel Sky Pirates at the Kisne Rise, Vaan invites them to stay and rest within the Galbana. The aegyl are initially suspicious of the humes, but after a time grow trustful of their hosts.

A sahagin who speaks hume language also inhabits the Sky Saloon. He is known as Namingway and often hides in hidden spots throughout the Saloon, changing positions as the storyline moves on. The player may talk to him any time in order to change the ship's name.

After the party meets Rikken at Port Marilith and learns of the damage to his airship, some of Rikken's crew takes refuge on the Galbana. Attracted by the Sky Saloon's comfortable quarters and Penelo's supposedly "delicious" cooking, the crew members decide to become permanent residents on the airship.

The last group of refugees include a wide range of races, all former Sky Pirates: 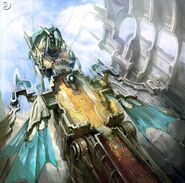 Artwork of the Bridge.

Artwork of the Sky Saloon.

Artwork of the left wing.

Diagram of the Derelict Bridge.

Diagram of the Sky Saloon.

[view · edit · purge]Galbana is a passion flower (flowering plants that grow passionfruit) found in the lush forests of Brazil.

In Revenant Wings the Galbana is named after Galbana Lilies, the favorite flowers of Reks, Vaan's elder brother, in Final Fantasy XII.