A Garden in the Galbadia Republic. It is the largest Garden of the three. Galbadia Garden's master, Martine, who is also the headmaster, has setup a program to recruit Balamb graduates into the Galbadian Army.

Galbadia Garden, also known as G-Garden, is a location in Final Fantasy VIII, situated on the Galbadian continent. It is one of the three Gardens. Martine is its Headmaster and Garden Master, and Irvine trains and lives there. Quistis also spent a brief time at Galbadia Garden taking lessons. Unlike Balamb Garden, Galbadia Garden does not train SeeDs, but instead focuses on advancing weapon technology and as a military academy for the nation of Galbadia. The Galbadian installation focuses its training program on technological aspects of combat rather than magic, and is the only Garden whose graduates use firearms. Unlike Balamb Garden, which attempts to maintain political independence, Galbadia Garden enjoys a close association with the Galbadian government and its military.

Twelve years ago Cid Kramer and his wife, Edea Kramer, founded the first Garden and constructed Balamb Garden on the continent of Balamb. Galbadia Garden was built sometime after. Like Balamb Garden, Galbadia Garden is built atop an ancient Centra structure, which allows it to fly.

Squall Leonhart's SeeD party arrives at Galbadia Garden when the way back to Balamb Garden is blocked off due to the trains having stopped. They run into Fujin and Raijin, Balamb Garden students who are there to deliver orders from Headmaster Cid, and receive news of Seifer's supposed execution.

Martine briefs the group on their new orders and sends them on their way to Deling City, the capital of Galbadia, to assassinate Sorceress Edea during her induction ceremony. Martine assigns one the Garden's best sharpshooters, Irvine Kinneas, to do the job, with the SeeDs there to cover him. Martine wishes to save Galbadia Garden from the sorceress's hands, as he knows she wants to take over his Garden. Cid, meanwhile, sees the time for Garden's true founding purpose to be put to use has come.

After the failed attempt on her life Sorceress Edea seizes control of the Galbadian government, and claims Galbadia Garden as her main base of operations. She assigns Seifer, who has become her sorceress' knight contrary to the execution announcement, as its commander. Martine flees to Fishermans Horizon in disgrace.

The Garden is transformed into its mobile form and taken to the Centra continent. A similarly mobile Balamb Garden, now under Squall's command, runs into it on their quest to Edea's House, and launches a full-scale assault. The Gardens butt heads as their pilots ram the hulls together, tangling the structures. Balamb cadets and SeeDs engage Galbadian soldiers while the remaining Galbadian cadets either join their Balamb counterparts or take refuge in empty classrooms.

Squall's party boards Galbadia Garden and, with the help of Fujin and Raijin, tracks the sorceress and her knight, Seifer, to the Headmaster's Office. The party defeats Seifer while the sorceress escapes to the Atrium below. The party chases her and engages her in combat.

Upon being defeated Edea unknowingly transfers her sorceress power to Rinoa Heartilly, one of Squall's party members, who revives Seifer before falling unconscious. Seifer departs, and Edea's mannerisms change and she addresses Squall and his party with kindness. Confused, the party retreats to Edea's house to talk things over, where Edea explains she has been possessed by a sorceress from the future, Ultimecia, but her defeat at the SeeDs' hands snapped her out of it.

After the Battle of the Gardens Galbadia Garden is never seen again and what becomes of it is unknown.

Galbadia Garden is located within the country of Galbadia to the north of Monterosa Plateau.

Like Balamb Garden, once the Garden becomes mobile its location becomes unfixed and is next encountered at Balamb where Galbadian troops use it as a mobile platform from which to launch an invasion and occupation of the town in their search for Ellone. It is later encountered over the forest near Edea's House where the Battle of the Gardens takes place. Following this Galbadia Garden disappears from the world map altogether. Unlike Balamb Garden, Galbadia Garden's distinctive base and foundation remain in place at its original location after the Garden itself had become mobile and moved away.

Galbadia Garden's layout is more enclosed than Balamb's; although it retains the basic circular design surrounding a central lobby, main sections are reached by enclosed hallways running around the perimeter rather than accessed through open-air corridors extending out from the center. It has two main floors accessible by stairwells, plus a headmaster's suite on the third story reached via a special elevator. The first and second floors are accessible to the entire Garden population, while the third floor requires key card access to the elevator.

Various during Battle of the Gardens
The front gate is the main entrance to the Garden. Upon entering the outer part of the gate, visitors travel down a large paved walkway before proceeding to a security checkpoint at the inner gate. SeeDs, students, and visitors must present their IDs for inspection to pass and enter the Garden.

Various during Battle of the Gardens

Cerberus (during Battle of the Gardens)
The front gate entrance leads to the lobby. The only access to the rest of the Garden, the lobby is guarded by the powerful Guardian Force Cerberus, who stands watch on a small risen platform at the lobby's center. The same spot also has a hidden Haste draw point. A save point rests by the right of the entrance. The lobby itself forms a perfect circle in which four corridors branch off in the cardinal directions, with the main gate at the southern point.

During the battle of the Gardens event, Cerberus can be fought as a boss, allowing him to be obtained as a Guardian Force and getting his card.

Various during Battle of the Gardens
The classrooms are located off various corridors on the first floor, arranged lecture-hall style with desks leading down a slope to a teacher's podium at the bottom. Students are obliged to be present in classes five minutes before the bell rings.

Various during Battle of the Gardens
The fieldhouse is located off the northern corridor, and is home to a large indoor track as well as what appear to be tennis and basketball courts, reflecting Galbadia Garden's love of sports. It contains a Shell draw point.

Protect (during Battle of the Gardens)

Slapper
The skating rink is located off the eastern corridor, and sports a large ice arena for the Garden's hockey and skating teams to practice and compete. The player can't step onto the rink during the first visit to G-Garden, as it is in use, but during the Battle of the Gardens, Slappers spawn here.

A locker room is attached for cadets to change and store their equipment. The player can meet a student from Trabia here and playing cards with him is the first time the player can experience or affect the Trabia region rules. He also mentions a hockey team made out of monsters.

Various during Battle of the Gardens
Dormitories are located off of various corridors on the second floor. Unlike the connected suites enjoyed by pairs of cadets at Balamb Garden, Galbadian cadets bunk four to a room. One wall is lined with individual sleeping berths, while the opposite wall contains four desks with computer terminals and rolling chairs.

Various during Battle of the Gardens
The reception room is a parlor located off the northern corridor on the second floor. Here, visiting dignitaries and other guests wait prior to meeting with the Headmaster.

None
The auditorium is a large arena located off the southern corridor on the second floor. Stadium seats surround a large elevated podium at the front, and large video screens hang on either side. The auditorium is generally used for Garden assemblies and as a forum for guest speakers, although the location may also cater to entertainment-related events.

The headmaster's office is located on the third floor, accessible by those with the clearance to activate a special elevator on the second floor near the reception room. Students may only visit the office when summoned by Headmaster Martine.

None
A solitary train station near Galbadia Garden for attending students. The station has a direct link to Deling City and is a site of students waiting for trains or simply "hanging out" after a hard day of school.

When Squall walks off alone while in the G-Garden, Zell ends up getting caught by one of the staff and forced to perform push-ups in the hall along with three other Galbadian students, one of whose intentions for doing push-ups are more perverted than altruistic.

During the battle of the Gardens event, the player can battle Cerberus in the lobby. Winning the battle nets it as a Guardian Force. If the player forgoes doing this, they must wait until Ultimecia Castle for another chance of getting the GF by drawing it from the castle's bosses.

Galbadia Garden uses the Galbadia region rules, where Same is the sole starting rule. There is a Trabian student in the locker rooms who plays with the Trabia region rules. There are no rare cards to be won at the Garden, but the female student in the classroom on the right side of hall (opposite to the Gymnasium) is the first opportunity for player to get the level 6 boss cards. After completing the events of Deling City parade, Galbadia Garden can no longer be accessed. If the player lost any rare cards to the Galbadia Garden students, Martine, who will be encountered in Fishermans Horizon, will be in possession of them.

"Galbadia GARDEN", the seventh track of the Final Fantasy VIII: Original Soundtrack second disc, is the theme of the location. The introduction begins with a militaristic feel before descending into a more mysterious tune. This track first plays Squall and his party explore the Garden on their first visit after the preceding events in Timber.

In the original versions, the intro only plays when first arriving in the Garden and the FMV scene plays showing students flying around in jet packs. see all of those mechs flying around. After this, the music that plays has the intro cut. In Final Fantasy VIII Remastered, the full track always plays when entering the location.

"Unrest", the eighth track of the soundtrack's second disc, is also associated with Galbadia Garden; it is heard when Quistis announces to the SeeDs in the reception room that Seifer is believed to be dead. 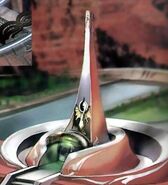 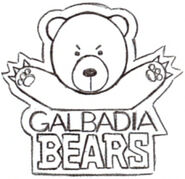 Squall and his party.

Top of the fieldhouse.