Galahd was raided by imperial forces late last night, according to reports. The Crown City dispatched forces upon hearing of the attack, but the damage was nevertheless devastating, and the number of casualties reported has risen steadily with the morning sun. Galahd resisted the imperial call for surrender after the wall was withdrawn, but had not seen hostilities in the 18 years leading up to last night.

Newspaper in the opening of Kingsglaive: Final Fantasy XV

Galahd is a location on the outlands of Lucis. It is mentioned as the homeland of Nyx Ulric and Libertus Ostium in Kingsglaive: Final Fantasy XV. It is also one of the locations the player can choose as their country of origin in Final Fantasy XV: Comrades, affecting their starting stats.

According to the Kingsglaive Official Movie Pamphlet[1], Galahd lies to the northeast of Insomnia and is a small group of islands. However, the newspaper article in the Kingsglaive: Final Fantasy XV opening, titled "Niflheim Attack on Galahd", shows the regions west from Insomnia.

According to the Kingsglaive Official Movie Pamphlet[1], Galahd lies to the northeast of Insomnia and is a small group of islands. This is where Nyx and Libertus used to run a small bar in their hometown. The Galahd River runs through the land and known for its beautiful scenery. Nyx and Libertus often played in the river when they were children. The area used to be protected by the Wall, but thirty years ago war overtook the lands and the Wall crumbled, allowing Niflheim to claim Galahd.

King Regis has formally invited brave volunteers from Galahd to take residence in Insomnia and serve in his new royal guard—the Kingsglaive, and promised regular provisions and patrols to Galahd in turn. Some Galahdian refugees made their way to the Crown City and Nyx and Libertus were selected to serve in the Kingsglaive for their aptitude for using magic. They still feel like outsiders and reminiscence of their lost homeland. Some native Insomnians view Galahdian refugees as immigrants and are prejudiced against them.

As Lunafreya Nox Fleuret parts ways with Libertus as they leave Insomnia, Libertus welcomes her and Noctis to visit him and Nyx at Galahd, where he returned to wait for Nyx in vain. When the Starscourge overruns Eos, Galahd is battered by daemons and is abandoned, though Libertus believes that one day they can route power to the town.

The song "Calling for Rain" is from the point of view of Galahdian refugees in Insomnia.

The description for Ulric's Kukris daggers says it is a pair of blades wielded by a hero who fought for the future of his homeland, and that one was forged in the Crown City, and the other in Galahd. Nyx himself appears with a large feline in some illustrations. It is a Galahd-native coeurl and Nyx's image-motif. Horns and fur on his gear symbolize him being wild and also foreign, as he is an immigrant from Galahd in thus from a different culture compared to Lucis.[2]

Galahd is on the islands northeast of Insomnia. 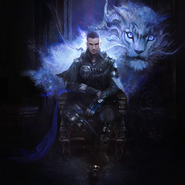 Nyx depicted with a Galahd-native coeurl.

Galahd may have been named after Sir Galahad from Arthurian legend, a knight of King Arthur's Round Table and one of the three achievers of the Holy Grail. Final Fantasy XV Universe has some allusions to the Arthurian legend with the Lucii fashioned after the Knights of the Round, and Noctis and his father Regis possibly being inspired by the legends of Pellam and Pelles, who are best known as the Wounded King and the Fisher King of the Lancelot-Grail rendition of Arthurian myth.