Gaia Rod (大地のロッド, Daichi no Roddo?) is a recurring weapon in the series. It is generally a low to mid-ranked Earth-elemental rod that provides no additional bonuses.

Gaia Rod is a low to mid-ranked rod that provides 38 Attack, 2 Magick Power, and 16 MP. It requires the Rods 2 license to equip, and can be bought for 3,300 gil at Rabanastre, Nalbina Fortress, and Mt Bur-Omisace.

In the Zodiac versions, it now provides 43 Attack, 6 Evade, +2 Magick Power, 33 CT, is Earth-elemental, and requires the Rods 2 license for 30 LP. it can be bought in Eruyt Village, Mt Bur-Omisace for 3,700 gil, found as a treasure in Paramina Rift (Karydine Glacier) and Trial Mode Stage 50 (with Diamond Armlet), or from the Atomos hunt. It can be equipped by the White Mage.

Gaia Rod is the second weakest weapon for Kytes, providing in its base form 10 Attack, 20 Magic, and 36 Attack Speed. It is bought from Tomaj's Sky Saloon shop (Chapter 3) for 700 gil, found in a chest (Mission 2-1) or forged with the Starter Manual recipe. 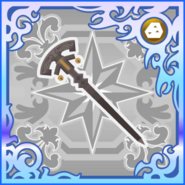 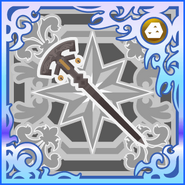