The Gaia Gear (だいちのころも or 大地の衣, Daichi no Koromo?), also known as Gaia Vest, Gaia Doublet, Gaea, and Earth Clothes, is a recurring body armor in the series. It is usually a light armor with an Earth-elemental affinity, though it also appears as a Robe in some games. It is often a high-rank armor.

A robe instilled with the earth's grace.

The Gaia Gear is an armor exclusive to the Black Wizard. It grants protection against Stone and Quake. It is the strongest armor in the 20th Anniversary version, and grants +35 Defense and +2 Weight. It can be found in Lifespring Grotto, or dropped from Undergrounder.

Known as the Gaia Vest, it can be equipped by the Freelancer, Geomancer, and Onion Knight jobs. It can be found in Saronia, and bought in Duster, Saronia, and the Invincible for 7,600 gil in the remake (4,200 in the NES version).

The Gaia Gear (Gaea on the SNES and Magic Robe in Easy Type) is a light armor that grants resistance against petrification. It grants +3 to Defense, Magic Defense, and Magic Evasion. It can be bought for 500 gil in Mysidia.

Gaia Gear provides +3 to Defense, Magic Defense, and Magic Evasion, and protection from Gradual Petrify. It can be bought for 500 gil in Mysidia, Baron (as Ceodore), Tomra, Troia, Mist, and Dwarven Castle, or found in South Underground Waterway (as Porom). It can be equipped by Cecil, Ceodore, Rosa, Rydia, Palom, Porom, Leonora, Harley and Golbez.

Clothing infused with the power of earth.

The Gaia Gear is a robe that boosts the user's Earth-elemental damage by 50%. It grants +8 Defense, +10 Magic Defense, and +18 Magic Evasion, and has a Weight of 2. It can be bought at Regole, Quelb, Castle of Bal, and Surgate Castle for 2,000 gil or dropped from Gravitator and stolen from Sorcerers and Abductor.

It can be equipped by Summoners, Chemists, Geomancers, Bards, Dancers, Oracles, Cannoneers, Necromancers, and Mimes.

The Gaia Gear is a light armor that lets the wearer absorb Earth-elemental damage. It grants +53 Defense and +43 Magic Defense, and can be equipped by all characters except Edgar, Cyan, and Umaro. It can be bought from Thamasa in World of Balance or from Nikeah and South Figaro in World of Ruin for 6,000 gil.

Shirt blessed by the Earth God.

The Gaia Gear is a light armor that teaches Osmose to Vivi, and the support abilities Insomniac and High Tide to all other characters who can equip light armor. It boosts and absorbs the earth element, and grants +25 Defense and +2 Magic Defense. It can be bought at Daguerreo (before going through the Shimmering Island portal) and Ipsen's Castle for 8,700 gil, and found in Oeilvert, Mount Gulug, and the "Faraway Lagoon" Chocograph treasure.

Gaia Gear is a piece of mystic armor that grants an HP bonus. In the original PlayStation 2 version, Gaia Gear boosts HP by 100, Defense by 35 and Magick Power by 8, and costs 9,300 gil at Balfonheim Port and is also available via the Hunt Club. It can be worn after unlocking the Mystic Armor 8 license for 35 LP.

In the Zodiac versions, Gaia Gear provides 47 Defense, 150 HP, 10 MP, 8 Magick Power, and requires the Mystic Armor 8 license for 60 LP. It can be found as a treasure in Cerobi Steppe (South Liavell Hills) and Great Crystal (Trahk Pis Praa), and is dropped by Mythril Golem (3% chance). It can be equipped by the White Mage, Red Battlemage and Black Mage, and Bushi.

The Gaia Gear is a dancer's robe equipped by Penelo. It provides +54 Defense, +81 Magick Defense, boosts resistance against Earth, and grants +10 Stamina. It can be bought in Chapter 9 for 24,000 gil.

Clothing made from brilliantly patterned material. It confers the protection of the earth to the wearer.

The Gaia Gear (Earth Clothes on the PlayStation) is a high-rank light armor that lets the wearer absorb Earth-elemental damage, as well as boosting Earth-elemental attacks. It provides +85 HP, +10 MP, and is available for 10,000 gil at many Outfitters starting in Chapter 4. It can also be found with the Treasure Hunter ability in Limberry Castle Gate as a rare treasure.

These blue clothes have been blessed by the earth.

The Gaia Gear teaches Auto-Regen to Hunters, Snipers, and Gadgeteers. It provides 24 Defense and 12 Resistance, as well lets the wearer absorb Earth-elemental attacks. It can be obtained as a random reward for completing a mission.

This blue clothing has been blessed by the spirit of the earth.

The Gaia Gear teaches Regenerate to Hunters, Snipers, and Tinkers. It provides +34 Defense and +12 Resistance, and can be bought for 1,500 gil in the shop after creating it in the Bazaar after using a Earth Sigil, Rose Branch, and Fine Wool.

The Earth Robe grants +5 Attack, +108 Defense, and +10 Magic. It can be made by using the Grand Raiment scroll.

A frock imbued with the breath of an earth spirit. For all tribes.

The Gaia's Armor is the strongest armor equippable by Benjamin, acquired at Mac's Ship in a chest. It grants resistance to Water, Wind, Thunder (no icon for it exists), Poison, and Sleep, and provides a Defense of 15.

Gaia Gear provides 10 Defense, 9 Magic Defense and 10 Magic Evade, and gives Intelligence +3 to the wearer. It is found in the Umberwood and bought for 3600 gil in Rusalka, Aulë and in Castle Falgabard from Mog.

Nature offers great bounties and blessings, but at the same time can cause calamity and destruction. When people believed they should show their gratitude to the land for its daily gifts in order to prevent its fury in the future, they would perform a especial dance. The gaia gear, which holds the power of the earth within, was made to be worn during said special ritual. It is said that wearing it prevents its owner from falling prey to the ailment known as stone.

Gaia Gear is a robe that provides 20 DEF, 5 MAG, 5 SPR, 30% Petrify resistance, +50% Earth resistance, and -50% Wind resistance. It can be bought for 3,000 gil at Industrial City Dilmagia, Village of Ambel, Town of Kolts, Aquapolis Olderion, Town of Amore, and Raven's Hideaway, crafted using 600 gil, Earth Cryst x8, Gaia's Tear x5, and Spellsilk x3, found during the exploration of Kolobos Reef, and obtained as the reward from the event "A Frosty Offensive".

A robe that amplifies the earth power of its wearer. It is woven from a special fiber that was bathed in energy waves from the earth. It must be kept dry, as prolonged exposure to moisture may cause unwanted vegetable sprouts to grow.

In Bravely Second: End Layer, Gaia Gear provides 25 P.DEF and 25 M.DEF. It can be found in the Skyhold. 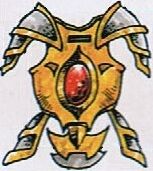