Clayware bell made of earth from many lands.

The Earth Bell (大地のベル, Daichi no Beru?), also known as Gaia Bell, is a recurring bell in the Final Fantasy series. It is related to the Earth element.

The Earthen Bell can be found at Saronia and may paralyze the target. It provides 88 Attack.

Bell infused with the power of earth. Full power from back row.

The Gaia's Bell (Earth Bell in the Anthology version and Earth in the RPGe translation) is one of the Sealed Weapons kept in the Sealed Castle of Kuzar. It powers up Earth-elemental attacks by 50% and has a 25% chance to cast Quake when attacking with it. It provides 35 Attack.

The Earth Bell is a mid-rank, Earth-elemental Instrument that deals damage of the same element and allows the user to absorb it as well. It teaches the ability to control Dragons to Beastmasters and the 100% Wool ability to Animists. It can be bought from Baguba Port and Cadoan for 3,750 gil and in any other town for 4,250 gil.

A bell imbued with earthly power that stirs you to action.

One of the Twelve Radiant Arms. A bell that rings beautifully. It's small enough to be held in one hand, but a single swing of it will send out rings that can shake the ground. It was said to have been used by a race that controlled nature itself, and in the hands of those skilled, the ringing would even replicate the creation of the heavens and earth. Only those who have shown their might to the Impure and Cunning Female Insect, Shaula, can use this bell.

Gaia Bell is an Instrument obtained by defeating Shaula in the Chamber of Arms. It provides 34 ATK, 46 MAG, 104 SPR, is Earth-elemental, has a 30% chance of inflicting Paralyze, and +30% Earth resistance. 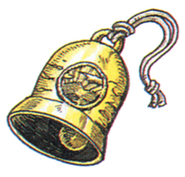 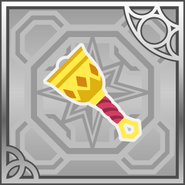 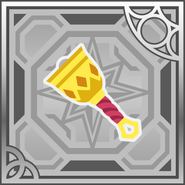