Gaia is a town from Final Fantasy located on the north-eastern continent of the world. Because of the mountains around it, it is accessible only by airship. There is a spring in Gaia that is home to fairies, many being found and sold to in black markets such as Caravan. Buying one and returning her to the spring will result in obtaining the Oxyale needed to breathe underwater, and thus enter the Sunken Shrine.

The background music that plays in Gaia is Final Fantasy's "Town" theme.

Gaia appears as ruins on the game's world map, at the Mirage Desert region. It is only accessible in the Confessions of the Creator scenario, after clearing the South Lufenia gateway, which is when the Teleport Stone located near it becomes active. A multi-floor gateway can be found inside: the Forsaken Lands Gateway. 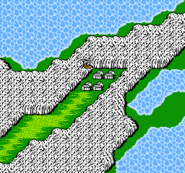 Gaia on the World Map (NES). 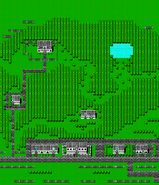 Gaia on the World Map (PS).

Gaia on the World Map (GBA).

Gaia, as seen in the World Map (PSP).

The ruins of Gaia and the Forsaken Lands Gateway in World B in Dissidia 012.