Gaelicat (ゲイラキャット, Gaira Kyatto?, lit. Gayla Cat), sometimes called Ghilacat or Cait Sith, is a recurring creature in the series introduced in Final Fantasy V. It appears as a cat wearing a flying contraption with a bell attached. Its signature attack is Cat Scratch. Commonly, a stronger variation called Flying Killer can also be found.

Gaelicat, known as Ghilacat in the original translation, is an enemy fought in North Mountain. It often appears in groups and perform middling physical attacks, with a stronger special attack in the form of Cat Scratch. A stronger variation, known as Flying Killer is fought on the Big Bridge. Additionally, a type of Gaelicat, known as Cait Sith in some versions, appears as one of the possible transformations of the enemy Metamorph.

A curious, charming creature with a feline body and the wings of a bat. Some scholars posit that it is a type of beastkin, while others insist that it is a lesser voidsent belonging to the eleventh rung of the hierarchy of twelve. One thing that cannot be denied is that it clearly possesses a keen, mischievous intelligence.

A Gaelicat is a type of Voidsent, creatures originating from the Void, the astrally aspected lost thirteenth shard of the Source. Gaelicats occupy the eleventh rung of the voidal hierarchy and are intelligent creatures often misclassified as Beastkin or Cloudkin. They generally live in Abalathia's Spine, within the northern reaches of Eorzea.

Despite appearances, a Gaelicat's wings and garb aren't external mechanisms at all, but rather extensions of its corporeal form. Naturalists, including the renowned Atelloune, take great interest in these, though they are often spurned by the Gaelicat's scratches and kicks and kept from their study. Multiple types of plants are known to have mood altering effects on Gaelicats; catmint will attract the beasts, gaelicatnip will cause them and other feline beastkin to become playful and docile, while dried cloudcrawler will cause them to become intoxicated and compliant.

Gaelicats, despite their nature, can be domesticated much like regular cats, often attaching themselves to people and acting as pets. A clowder of Gaelicats has taken permanent residence in Ishgard's Firmament, where they are fed and sheltered. Gaelicats are an important part of Vanu Vanu culture, with the Gundu using them in fortune telling rituals from mundane things such as determining the direction their newly erected buildings will need to face to more serious matters, releasing them into the Sea of Clouds to receive omens of the future. Gaelicats in the Sea of Clouds find natural predators in Catkillers, fresh water pike that impale their dorsal-fin into any Gaelicat that approaches the surface of the water. Clan Centurio will regularly authorise hunts of Gaelicats when they become too populous.

The Gaelicat was introduced in the Heavensward expansion. They spawn at level 50 near Camp Cloudtop in the Sea of Clouds and are involved in the level 50 FATE

Sohm Al at level 53. Further variations of the Gaelicat are present in the

The Palace of the Dead and the

The Aquapolis, known as Deep Palace Gaelicat and Polis Gaelicat respectively, both at level 60.

A Stray Gaelicat acts as both enemy and NPC, the former as part of the sidequest

Gaelicat's Out of the Bag. A 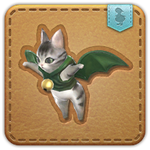 Gaelikitten is a kitten version of the Gaelicat and can be obtained as a minion from clearing Sohm Al or as a random drop from Palace of the Dead, Aquapolis and Kupo of Fortune. 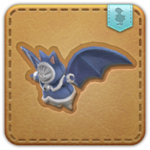 Weatherproof Gaelicat is a rotund Gaelicat with a blue parka that lives in the Firmament. It can be obtained as a minion from Kupo of Fortune. A plush replica, known as

A replica Gaelicat headgear, known as

Gaelicap, was awarded to winners of certain contests in the 2016 Fan Festival and the digital 2021 Fan Festival. Additionally an NPC known as Nekobunyo is seen wearing this hat in some events.

The other type of Gaelicat is Evil Gaze (イービルゲイズ, Ībirugeizu?). Unlike other types of Gaelicats throughout the series this one is not a cat but a winged demon. Two Evil Gazes act as the bosses of the event The Power of Knowledge CHAOS.

Both Gaelicats and Flying Killers appear in Pictlogica Final Fantasy.

Gaelicat is an enemy fought in Bridge of Moore and Interdimensional Rift. It is based on the Final Fantasy V version of the enemy.

Gaelicat is an enemy fought in Final Fantasy V realms. They are immune to earth elemental attacks and will perform Cat Scratch for medium physical damage.

A cat-like monster which appears on the Big Bridge, located in a world far away. The large purple wings on its back aren't actually growing from it, it is simply carrying them. Not possessing much in the way of flashy attacks, they are not difficult to deal with. They are often seen in groups, flowing at low altitude over the water.

Gaelicat: FFV is an ability card that grants the ability Cat-astrophe to a Monk-type Job. It is a wind elemental card that can range from ★3 to ★5 in rank. It can be obtained through Card Summon or Boosted Greater Summon. Despite being called Gaelicat: FFV the design in the card art more closely resembles that of Final Fantasy XIV's gaelicats rather than those from Final Fantasy V.

A gaelicat, named Lukahn, belongs to the Mysidian princess, Sara Mysidian. Sara claims he was a gift, a new kind of species. Unlike gaelicats in other media, Lukahn does not have wings but is drawn to attempting to make wings for himself. Having escaped from the royal palace, Lukahn pilfered cloth and clothes hangers and attempted to fashion them into wings.

Spritework of Flying Killer in the iOS version of Final Fantasy V. 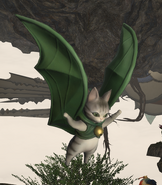 In-game screenshot of a Gaelicat in Final Fantasy XIV.

In-game screenshot of the Gaelikitten minion in Final Fantasy XIV. 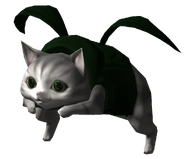 [view · edit · purge]The Japanese name, ゲイラキャット (Gaira Kyatto?, lit. Gayla Cat) is a play-on-words of "Gayla kite" (ゲイラカイト, geira kaito?), keel-stabilized kites which were popular in the 1970s for their innovative delta wings and their triangular bat-like designs. Their English name, Gaelicat, is phonetically similar to their Japanese name, but it's altered enough to be a portmanteau of "Gaelic" and "cat", and instead alludes to the Celtic fairy cat, cait sith.