Cid Pollendina: Oh, shut up and help me remodel the Gaea's Cliff page!
Please expand this article into a full one. The following tasks need to be completed:

Gaea's Cliff is an unrevisitable location in Final Fantasy VII. From the ground, it seems to be a mountain, but is actually the side of the North Crater. Due to its height and location past the frigid wastes of the Great Glacier, the cliff is so cold few can survive the climb-up. A large cave system penetrates the cliff, which must be explored to reach the top.

Mr. Holzoff and a friend of his once attempted to climb Gaea's Cliff, but the expedition ended when his friend was killed on the task. Holzoff now resides in a cabin at the base of the cliff to help out potential climbers. Cloud Strife and his party climb Gaea's Cliff to reach Sephiroth at the Whirlwind Maze.

Due to the name of the planet officially being Gaia in certain English promotional materials (see naming of Gaia), Gaea's Cliff may appear as a reference to it. However "Gaia" (ガイア, Gaia?) has never been used to refer to the planet in any Japanese media, and thus the connection may be coincidental.

There's an ice rock that can be pushed.

Dropping icicles into this room raises the water level that leads to an exit.

In this area the icicles are fought, cracked, and dropped.

Spring heals HP and MP, and despite not saying it removes status effects too.

Short ascent before an FMV starts.

At the cliff area, the player can climb the cliff by approaching the red flag and tapping

. The player must keep the party's temperature above 30° Celsius by repeatedly tapping

. This can only be done while on a platform, and not while climbing. Cloud's body temperature can assume values between 26 and 38 °C, and Cloud will pass out at 26 °C. If Cloud passes out, he will wake up at Holzoff's hut; there is no Game Over. While Cloud's body temperature is above 32 °C, it takes 5.7s for it to drop a degree, but when below 33 °C, it only takes 3.7s to drop.

This segment was more difficult in the original Japanese version, where the player's temperature dropped much faster, making it harder to climb all the way on the first try.

There are three E.Skills the player can learn while on the Gaea's Cliff, and it is best to get all of them while here as Gaea's Cliff is an unrevisitable location.

Malboro on the snowy slopes has Bad Breath. The player should equip Ribbon on the same character who has the Enemy Skill Materia, and then use White Wind after Malboro uses Bad Breath to cleanse the party of the status abnormalities.

Stilva inside the caverns of Gaea's Cliff has Magic Breath and Trine, though it never uses the latter unless Manipulated. This is the last chance to learn Trine if the player already defeated Godo in Wutai Village. Protecting the party against Lightning damage will protect against both Magic Breath and Trine. The player could also use Big Guard to soften the damage.

shows an area that can never be accessed in the final game. This area is only seen in very old footage shown before the game's release. 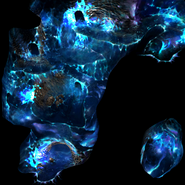 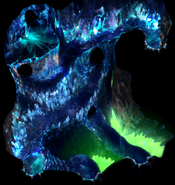 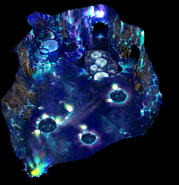