Carvings depicting the tale of a half-man, half-beast hero adorn the shaft of this spear.

Gae Bolg (ゲイボルグ, Geiborugu?), also known as Gae Balg, is a recurring spear in the Final Fantasy series. It is often a high-ranked spear with decent Attack power, and is acquired late in the game.

Gae Balg is a weapon Kimahri can acquire if the dominant auto abilities on any of his spears are Overdrive → AP and Triple Overdrive.

The Gae Bolg polearm drops from the Notorious Monster Voivre in the Ifrit's Cauldron, one of the few high-level monsters which spawn passive in the entirety of the game. Though the drop rate is 100% and the spear is very powerful for its level of use, it has an unusually high weapon delay, which makes it inferior to higher-level alternatives because of its slow attack speed.

Once the property of a hero doomed to wade through blood, this well-used weapon almost seems to leap back at attackers of its own accord.

The Gae Bolg is a first-tier spear for Fang that can be bought in Plautus's Weapons Workshop in Chapter 8. It has an improved Counter rate, and a Positive Effect synthesized ability that prolongs positive buffs' effect. Gae Bolg maxes out on level 21 and transforms into Gungnir with a Scarletite. Its maximum Strength is 103 and maximum Magic power 92.

Gae Bolg is the Relic Weapon for

Dragoons. The Unfinished Gae Bolg is acquired and upgraded to Gae Bolg in the quest

A Relic Reborn (Gae Bolg). It can then be upgraded to the Gae Bolg Zenith. Gae Bolg is also notably the weapon wielded by Estinien Wyrmblood.

A Gae Bolg based on the Final Fantasy XIV version is included as a preorder bonus from Amazon. It is now available as a DLC item.

A spear said to have been wielded by a child of the gods. Merely lifting it requires great strength.

Gae Bolg is the third strongest spear, providing 29 Attack and 15% Defense. It can only be obtained via Melee, making it exclusive to the PSP remake.

Spear like one born by a half-beast hero of old.

Gae Bolg is a mid-ranked spear that teaches the skill Bolt Breath to Dragoons. It provides 39 Attack and is Lightning-elemental. It can be bought from Sprohm for 11,200 gil and from any other town for 12,600 gil.

Gae Bolg is a mid-ranked spear that provides 35 Attack and is Lightning-elemental. It teaches Thunder Breath to Dragoons for 300 AP, and can be bought for 1,180 gil in the shop after creating it in the Bazaar after using a Storm Stone, Cruzle Brass, and Telaq Flower.

A magic pike that has plucked countless lives. When thrust, it splits into 30 barbs.

Gae Bolg is a high-ranked spear that can be used by any race. It provides 136 attack at level 1 and 168 attack at level 30, gives +25 to Stun, has one empty slot, and comes with the abilities Black Mage Wisdom 1 and HP Absorb Attack 1. It can be obtained from a chest in the Tower on Hard or Very Hard, and then created for 1,800 gil by using an Adamantite, Abyssian x3, and an Ebonite. When turned into a jewel, a level 3-9 Gae Bolg makes an Ebonite, level 10-19 makes a Berserk Eye, and level 20-30 makes an Anti-Stun Stone 5.

When Amidatelion summons Bahamut to prevent Layle and Keiss from continuing to pursue her, the mighty dragon holds the legendary spear Gae Bolg in his tail. This, however, proves to be Bahamut's undoing because, after the summon destroys the island with his signature Mega Flare, Layle is able to use his gravitokinetic powers to take control of the weapon and drive it straight through Bahamut's torso, defeating him.

The spear also appears alongside its wielder on the "Bahamut Strikes" emblem for Layle's coat.

The Gae Bolg is a spear with an attack of 13. It can only be bought from the multiplayer shop in Urbeth for 4,290 pts.

Players can craft the Gae Bolg. It is an Insect Glaive and can be crafted using materials from the Behemoth fight.

A legendary spear wielded by the warrior of old, Cú Chulainn. The winged blades extending from both sides dig onto enemies, rending them apart from the inside. Riding his trusted steed Sainglend into battle, Cú Chulainn boasts countless victories over myriad foes. 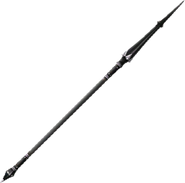 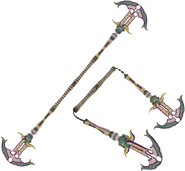 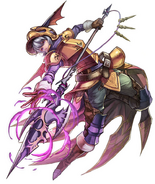 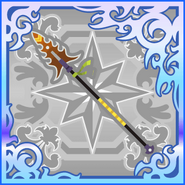 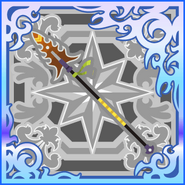 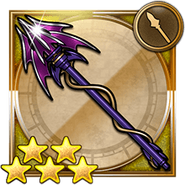