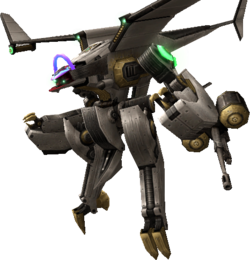 Imperial scientists had long sought to create a high-mobility, flight-capable magitek armor, and they finally succeeded with the Gabriel. Sensing the coming of war, researchers rushed the development of the mech and managed to deploy the device at Togoreth as a test: not of its long-range arsenal, but of its magic barrier. While the Gabriel's magic neutralization capabilities functioned perfectly, the MA's preliminary engine was unable to handle prolonged use. As a result, the Gabriel would periodically overheat, leaving it completely vulnerable to enemy retaliation--much to the frustration of its pilot, Brigadier General Qator Bashtar.

The novels depict the penultimate spiral of Orience prior to the final spital as depicted in the game. Ace, Machina and Rem from Class Zero defeat Qator Bashtar and his Gabriel in McTighe as the MA's magic barrier is not strong enough to nullify all of their spells. This setback makes Qator want to become stronger, and the opportunity reveals itself when the White Tiger Secundus l'Cie Qun'mi Tru'e is looking for a successor for her l'Cie powers; Qator inherits her powers, which allows him to enhance the Gabriel. Qator later leads the Militesi forces upon Akademeia, but the military is annihilated by the Rubrumite Verboten Eidolon, Qator able to escape due to enhancing the Gabriel's magic barrier with his l'Cie powers. As Rubrum marches upon Milites, Qator and Gabriel act as Marshal Cid Aulstyne's final line of defense, yet he falls against the combined might of all 14 Class Zero cadets, who yet spare Qator's life after Gabriel begins to break down and he abandons it. After Cid's demise Tempus Finis commences and Pandaemonium rises from the sea. Qator offers to take Class Zero there on the Gabriel, and afterward turns to crystal.

At the onset of war, the empire's main strength was its fleet of Warrior MAs. Although these mechs could handle regular Dominion of Rubrum legionaries, the only hope they had of defeating the Agito Cadets of Akademeia was to outnumber them. The MAs were no match against the dominion's Eidolons, and thus imperial scientists devised new models to aid the anti-dominion offensive.

One of these was the prototype Gabriel, equipped with a magic shield capable of neutralizing the dominion's spells and piloted by Brigadier General Qator Bashtar at the battle of Togoreth. Unlike the crystal jammer, this magic shield function is simple enough for mortals to control. Unfortunately, the Gabriel is unstable and prone to overheating.

After Class Zero cadets defeat the base commander at Togoreth reclaiming the fort, General Bashtar appears with Gabriel and fires at the dominion legionaries. The Class Zero cadets face Gabriel head on, forcing Bashtar to flee. The Dominion Central Command gathers intel on Gabriel based on its battle against Class Zero at Togoreth, and deduces it is a prototype produced at the Steelworks plant in Ingram.

After the empire allies with the Kingdom of Concordia Rubrum faces invasion on two fronts. Qator leads the invasion on the Militesi side, but Rubrum annihilates the Militesi army with the Verboten Eidolon Alexander. Alexander's Divine Light destroys everything on its path, but the new White Tiger Secundus l'Cie augments Gabriel's magic shield to such extent Qator and the l'Cie withstand Alexander's attack, and are the only survivors. Seeing the extent of the massacre, Qator flies Gabriel back to Militesi territory with the l'Cie on board.

The tide of battle turned, the dominion quickly conquers the Militesi territory until only Ingram is left. When the dominion legionaries infiltrate Ingram Qator Bashtar prepares to defend the Militesi headquarters with his new and improved Gabriel model: Gabriel Omega.

He engages Class Zero, but unknown to him, a Militesi engineer, sensing the empire was about to capitulate, had fit Gabriel Omega with a malfunctioning prototype of an Ultima Bomb to wipe out both armies. Not wanting to see the city destroyed, Qator flies Gabriel high up into the atmosphere and jettisons the Ultima Bomb into space. It explodes, but the damage Gabriel had sustained from the battle against Class Zero ensures it can't escape the blast zone in time and is destroyed.

[view · edit · purge]In Abrahamic religions, Gabriel is an archangel who typically serves as a messenger sent from God to certain people. In the Bible, Gabriel is mentioned in both the Old and New Testaments. Gabriel is not called an archangel in the Bible, but is so called in Intertestamental period sources like the Book of Enoch. In the Roman Catholic, Anglican, Lutheran, Eastern and Oriental Orthodox churches, the archangels Michael, Raphael, and Gabriel are also referred to as saints.

In Islam, Gabriel is considered one of the four archangels whom God sent with his divine message to various prophets, including Muhammad.