The guardian of the law who presides over judgments of life and death, his true strength is realized when he dons his helm.

A warrior who swears his life to those he trusts.

Gabranth is a warrior of Chaos and an extra character in Dissidia Final Fantasy and Dissidia 012 Final Fantasy. An Archadian Judge in service to the Empire, he took on the guise of his twin brother, Basch, and killed King Raminas of the Kingdom of Dalmasca, disgracing Basch and ensuring Archadia's dominance of the region. Chaos was impressed by Gabranth's crimes and summoned him to the wars to fight among his forces.

In battle, Gabranth uses his power to quickly charge his EX Gauge, and then crushes opponents with powerful attacks. As an extra character, Gabranth has little impact on the main storyline, although he has a long-standing rivalry with Shantotto, confronting her and Cosmos in an earlier cycle, intending to kill Cosmos to end the war. In Dissidia 012 Final Fantasy, though Vaan is also from Final Fantasy XII, the two never actually meet during the war.

Gabranth's original outfit is based on his design in Final Fantasy XII.

He wears gray and silver Judge's armor with a helmet with curved horns, and a black cape with the insignia of the Archadian Empire.

When in EX Mode, this outfit gives Gabranth a golden aura instead of red.

Gabranth's second alternate outfit "Captain's Gear", is the uniform of a Dalmascan soldier, which Gabranth wore in the introductory sequence of Final Fantasy XII to impersonate Basch.

He wears a red and brown uniform with armored plates along the chest, steel gauntlets and boots, and longer hair. 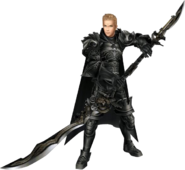 Gabranth dual-wields two swords, the Chaos Blade and the Highway Star; the Chaos Blade is the longer sword and the Highway Star is the shorter. The two blades can be wielded separately or connected at the hilts to create a dual-bladed weapon. Gabranth wields the two swords in their combined form in his normal mode, and normally wields them disconnected in his EX Mode but will connect them when performing certain attacks. In his first alt outfit, the two swords take on a dark black color scheme to match the color of Gabranth's armor. 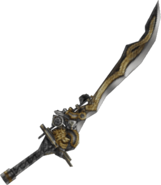 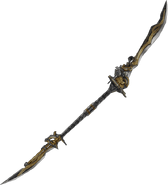 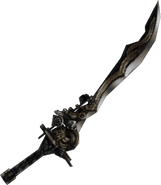 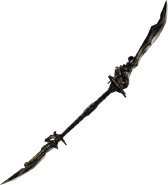 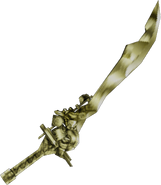 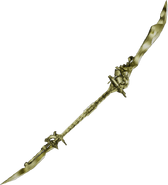 Crystal Chaos Blade connected to the Highway Star in Dissidia.

Hmph. Just another stray being played with by the gods. No matter. Choose the path you wish to take. All paths lead to the same end, anyway. You keep fighting...and die like a dog.

Gabranth is cruel and ruthless and looks down on the other warriors regardless of alignment. True to his original occupation, Gabranth sees himself as the one to pass judgment on the fates of his enemies, and declares himself to be driven by rage and hatred alone.

Gabranth is aware of his purpose as a tool in the conflict between Cosmos and Chaos and has become disillusioned. He holds a grudging respect for strength, as he recognized Shantotto's capacity as a powerful mage, and allows the player to exit his realm after testing their resolve. In parting, Gabranth tells the warrior that they will know loss and despair, but they should never lose hope and never become like him, indicating that however cruel Gabranth's fate may be, he does not desire for it to befall another warrior.

In the earlier cycles of war, Gabranth fought loyally for Chaos. Seeking to end the cycles of war by killing Cosmos, he travels to Order's Sanctuary and battles Shantotto, Cosmos's bodyguard, but she emerges victorious. On another occasion Gabranth fights her again and asks if she remembers their previous fight, but she did not due to her purification. Seeing no point to the conflict, Gabranth ends the fight, telling her to ask Cosmos about the nature of the cycles and purification.

Garland and the Emperor confront Gabranth on his unwillingness to continue fighting, and the three come to blows when Gabranth declares he has no intent of serving Chaos in such a war. For this, Gabranth is cast out of the cycles into a hell dimension. He remains in the dimension outside the conflict, and occasionally rifts in space open allowing other warriors to find his domain.

On another occasion, Gabranth fights Prishe to distract her while Garland goes to Order's Sanctuary to kill Cosmos. Though Prishe defeats him, Gabranth tells her the loss means nothing and retreats, while Cosmos' warriors fade away with her death.

During an unspecified cycle, Vaan finds a mysterious gateway and enters it to find himself in the hell dimension Gabranth was banished to. Gabranth offers to show Vaan the exit if he fights him, and the two battle twice. Between battles Gabranth tells Vaan how he fought with pride but was discarded when he questioned his duties, and that fighting the war is a pointless struggle. Vaan defeats Gabranth a third time and is shown the way out, but when he asks if Gabranth intends to return as well, he declines, choosing to remain as a guardian to guide other wayward warriors who stumble upon him.

Gabranth's confrontation with Shantotto is seen in a flashback after the warriors of Cosmos have gathered their crystals.

In Dissidia's Distant Glory Redemption of the Warrior, and in Dissidia 012's Confessions of the Creator, at the Land of the Stolen Crown gateway, Gabranth is found in a hell dimension where those discarded from the cycles of war are sent. Questioning the player character's resolve and what they did to be sentenced here, Gabranth taunts them as they fight their way to the exit to return to the main world. At the exit, Gabranth battles them to judge if they deserve to live again.

Gabranth's fighter title is EXecutioner. Normally, Gabranth moves very slowly and his Bravery attacks are slow and weak, and he has no way to deal HP damage outside of Chase Sequences, which none of his Bravery attacks can initiate. Instead, his sole HP attack charges his EX Gauge, and once in EX Mode Gabranth gains a significant boost in movement speed and an entirely different moveset. In this state Gabranth attacks with fast, powerful Bravery attacks that have significant range even though they are melee strikes, and his HP attacks can be very difficult to avoid. In tandem with the standard EX Mode bonuses of Regen and increased critical hit rate, Gabranth becomes extremely dangerous.

The obvious downside is that he is very weak outside of EX Mode and must evade opponents while charging his EX Gauge, and should then go on the offensive once in EX Mode to deal as much damage as he can before the EX Gauge runs out. In Dissidia 012 he is particularly vulnerable to Assist attacks; while Gabranth has a unique ability to prevent the opponent from gaining a Bravery bonus for inflicting an EX Break on him, an Assist attack will still instantly deplete his EX Gauge and force him out of EX Mode. His reliance on his EX Charge attack also limits his equipment possibilities - accessories that lower EX Force Absorption will also decrease the rate at which EX Charge fills the EX Gauge, significantly hindering Gabranth.

In Dissidia, Gabranth is faced as a boss at the end of Distant Glory and Inward Chaos.

In Dissidia 012, he is faced at the bottom of the "Land of the Stolen Crown" gateway in Scenario 000, and fought by Shantotto during Report #8.

See also: Gameplay changes between Dissidia and Dissidia 012 for Gabranth 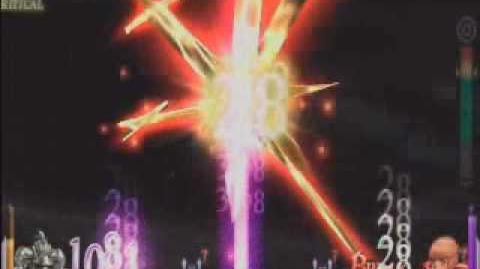 Gabranth's EX Mode is Mist, where he dons his helmet, separates his swords, and glows with a red and black aura. While in EX Mode Gabranth gains the ability "Stray's Tenacity". This ability greatly boosts Gabranth's movement speed, increases his ATK by 4 and DEF by 3, and grants him a completely different set of attacks as listed above. In Dissidia 012, Gabranth also gains the ability "Jamming", which prevents the opponent from gaining Map Bravery when EX Break is inflicted on him.

Gabranth's EX Burst is Quickening, where he performs variations of his brother Basch's Quickenings from Final Fantasy XII. The player must press

within a time limit. His Quickenings go in this order: Fulminating Oblivion (create a blast of energy that hits the opponent multiple times), Ruin Unflinching (punch three times to shatter the screen around the opponent), and Frost Purge (summon multiple swords that converge on and stab the opponent). Depending on how many Quickenings the player links together, Gabranth will end the EX Burst with one of the three Concurrences to deal HP damage: Inferno (a blast of fire), Ark Blast (a blast of electricity), or Black Hole (a blast of darkness). 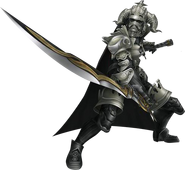 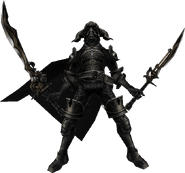 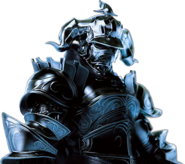 Gabranth was the last character revealed for the original Dissidia: the final Japanese trailer for the game showed him at the end of the video, when he stepped into frame to confront Shantotto and Cosmos.

The Official Quests create a continuity snarl in regards to when Gabranth was ejected from the cycles. In his own quest "One Who Faces the Hell", Gabranth fights Garland and the Emperor before being exiled, and it is implied this occurs immediately after he leaves his fight with Shantotto. However, Gabranth is also present in Prishe's quest "The Death of Cosmos" when Cosmos was killed by Garland and her warriors disappeared, and it is stated none of them ever reappeared in later cycles except for the Warrior of Light. Since Gabranth's quest shows him fighting Shantotto, it must take place before Prishe's quest, but by the time of her quest he ought to no longer be present. The only possible way to reconcile this discrepency is to presume that the first scene of Gabranth's quest takes place in an earlier cycle than the rest of his quest, and Prishe's quest and the death of Cosmos occurs in-between them.

Vaan and Gabranth are the only characters of the same game to have different naming schemes for their manikins. His manikins use the "of Antiquity" naming scheme also used by Shantotto, because he and Shantotto had no counterparts from their own games in the first game and were depicted as each other's nemesis instead. In Dissidia 012 the two retained this naming scheme which is also shared by Prishe.

Gabranth is the only character whose manikin receives benefits beyond Regen and Critical Boost when it enters its EX Mode. Warriors of Antiquity receive the Stray's Tenacity effect when Powered Up, because otherwise they would not be able to properly fight.

Although Gabranth's status as the younger twin between himself and Basch was always stated in the Japanese versions of Final Fantasy XII, Dissidia was the first game to explicitly identify him as such for non-Japanese audiences.