Judge Gabranth is a playable character in Dissidia Final Fantasy NT and its arcade version, representing Final Fantasy XII. He is a Specialist type.

Gabranth's default costume is "Judge Magister", updated from his main appearance in both Final Fantasy XII and previous Dissidia games. His suit of armor has been updated, featuring more accentuation of his ornate markings and metallic luster. Because of the reworking of EX Skill, Gabranth's aggressive fighting style in EX Mode, along with his helmet, are retained throughout battle, though taking a certain amount of damage will greatly damage the helmet or completely remove it. His first alternate coloration resembles that of fellow Judge Magister Ghis, coloring his armor bronze with a red cape. His second alternate coloration recolors his armor black with the ornate patterns white and his cape purple. 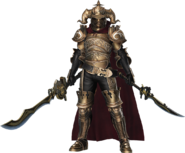 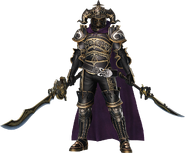 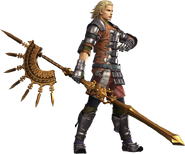 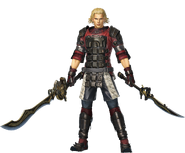 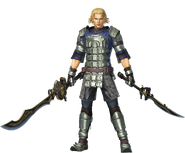 False General III
Add a photo to this gallery

Gabranth's weapons are dual-bladed swords which he can freely disconnect at the hilt to wield as two separate weapons, the signature weapon of the Archadian Judges. By default, he fights dual-wielded, but reconnects his weapons in several of his attacks.

His default weapons are the Highway Star & Chaos Blade, wielded by him during his encounters in Final Fantasy XII. His first alternate weapons, Daybreak & Twilight, are Judge Ghis's weapons; golden in color, the primary sword is a large blade whilst the smaller sword a spiked fan; a half arch crescent guard and a long protruding blade with a series of trailing blades that follow down the guard. His second alternate weapons, called Triumph & Imperial Ensign, are Judge Bergan's weapons; the blades are rectangular and feature additional spikes at the edges of the blades. His third alternate weapons, Mace of Themis & Redemption, are Judge Drace's weapons; a dual-headed club with a longer, larger head on one end, and both themed in an enigmatic arthropod like design, sporting the apparent preserved and possibly reinforced bodies of insect based monsters with some limbs and anatomy jutting out metal blades.

All of Gabranth's weapons are featured in Final Fantasy XII and its updates International Zodiac Job System and The Zodiac Age, though he only wields his default weapons while the other blades are used by their respective Judge Magisters. The Dissidia series is the first time in which the alternate weapons have official names, and both their naming and design reflect that of their owner's personalities. 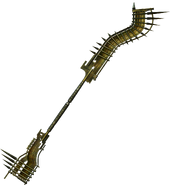 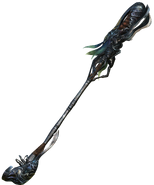 Mace of Themis & Redemption
Add a photo to this gallery

Presentation screenshot.
Add a photo to this gallery