I am Fusoya, and I am charged with watching over the slumber of the Lunarians.

Fusoya is the final playable character in Final Fantasy IV who also appears in Final Fantasy IV: The After Years. He is a Lunarian from the Red Moon, and it is his job to watch over the Lunarians' sleep. He is the oldest of the main characters and reveals significant plot details during the short time he is with the party. In the English localization of the 3D remake, Fusoya is pronounced [fuˈsɔɪ.ə] ("foo-SOY-uh"). In the iOS version his name is retransliterated as Fusuya.

Fusoya is an old man wearing blue and purple robes of varying shades. His true age is unknown, but as he reached Earth when humanity was still evolving, he may be one of the oldest characters in the entire Final Fantasy series. He has long silver hair and a long beard with bushy eyebrows, and has light blue eyes.

Fusoya is wise and well-spoken, possessing knowledge of magic and the universe far beyond what he reveals. Like the other Lunarians, he awaits the day when humans evolve to the point their two races can co-exist in peace. He pities the great powers Zemus wields are being used for evil ends.

Fusoya was tasked to watch over the Lunar Sleep, but a Lunarian named Zemus desired to annihilate life on Earth so that the Lunarians could take it over. Fusoya awaits on the moon for one who would help defeat Zemus; this person happens to be his nephew, Cecil Harvey, accompanied by Rydia, Rosa Joanna Farrell, and Edge.

Fusoya tells them of Zemus's plan. Zemus was gathering the Crystals to activate the Giant of Babil, a wish-granting giant who would destroy the world on command. Zemus was manipulating Golbez to achieve this goal. Fusoya joins the party to stop the giant, as he can deactivate its shielding. 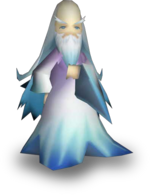 The party returns to Earth as the giant begins its wave of destruction. Cid Pollendina mobilizes the world to join the battle in a fleet of newly remodeled airships. Cid helps the party enter the Giant of Babil and the party work their way to the CPU and fight the Archfiends along the way. When they destroy the CPU, an angry Golbez appears. Fusoya breaks Zemus's control of Golbez, and reveals Golbez and Cecil are brothers. Golbez agrees to help Fusoya defeat Zemus, and the two return to the moon using the teleporter in the Tower of Babil.

Fusoya and Golbez defeat Zemus by casting Meteor together. Zemus's hatred, Zeromus, rises from Zemus's corpse and attacks Fusoya and Golbez. They try to cast Meteor again, but it has no effect. Fusoya orders Golbez to use a special Crystal, but Golbez's darkness prevents it from working. Zeromus defeats Fusoya and Golbez with Meteor, leaving Cecil and his party to fight Zeromus. The prayers from former party members, including Fusoya and Golbez, help them succeed. After Zeromus's defeat, Fusoya and Golbez return to the Lunar Sleep as the Red Moon leaves the Earth's orbit.

Fusoya battles a revived Zeromus with Golbez before the monster destroys the Crystal Palace with a Big Bang. Fusoya teleports Golbez out so he can continue to fight against the evil attacking the world. His fate remains unknown. After the Creator has been felled and peace returned to the world, Golbez sets out look for Fusoya and the other Lunarians.

Fusoya is the first completely nonhuman playable character in the series. Fusoya is a temporarily playable party member. His stats are weighted towards magic and will not grow when gaining levels until reaching Lv.70. He has access to all White and Black Magic, but has a limited MP of 190. In the 2D releases, Fusoya can cast Regen on all party members, which prevents him from acting while he restores HP to others. In the 3D releases, this is replaced with Bless, which applies a Regen-like effect that restores MP over time and does not prevent him from acting. Fusoya's role is similar to Tellah, as he is severely limited in MP and stats, and only briefly available.

In the original SNES version, if any ally with the Twincast command is hacked into the party and uses that command when Fusoya is present, he will respond and Twincast as well. (If Palom and Porom are both hacked in and their Twincast ability is used, Palom and Fusoya will Twincast.)

Fusoya returns as a temporarily playable party member. His level is capped at 40, and other than HP, his stats do not grow by level. He knows all Black and White Magic, and his Bless ability uses his next three turns to restore HP and MP. His max MP is 190, but can be increased with items. Fusoya only has a single Band with Golbez, but is only ever in a party with Golbez.

Fusoya's theme is "The Lunarians". It plays at the Lunar Tunnel and when Fusoya frees Golbez from Zemus's control.

Fusoya appears in the following games in the Final Fantasy series:

Fusoya is the name of a Ghost Card in Dissidia Final Fantasy. The Fusoya ghost is a level 100 Golbez equipped with a full set of Adamant equipment and the Gungnir, and has the Whisperweed and Yellow Gem to be won in Battlegen. The quote on the card "It's nearly done! Give your power to Meteor!" is what Fusoya says to Golbez when the two fight Zemus at the end of Final Fantasy IV.

In Final Fantasy IV, Fusoya is the only party member whose in-game portrait faces to the right. Everyone else looks forward or to the left. He is also the only character in The After Years not to get a new portrait, with the exception of the portraits for the characters in their Pig or Frog status. He also cannot equip the Master staff, even if he can equip the weapon.

Fusoya, Tellah, and Cid are the only playable characters in Final Fantasy IV not to receive CG models or appear in FMVs in the 3D remake. 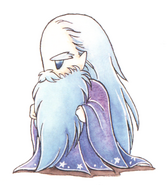 Akira Oguro artwork for Fusoya's and Golbez's chapter from Final Fantasy IV: The After Years.

The After Years battle sprite (Wii).

Fusoya appears to the party (iOS).

Victory pose in The After Years (PC).

Level Up pose in The After Years (PC).

"Fu" and "shou" are Chinese words that respectively mean "good fortune" (福) and "longevity" (寿). "Ya" (阿) in Chinese is an affix used to mark some people's names. Kluya also has this affix.