Galbadia is completely at the mercy of the sorceress. This country is now merely a tool for her. Fearing the sorceress, the rest of the world will unite against Galbadia. I fear it will be the Sorceress War all over again... Our enemy Esthar was also ruled by a sorceress... The same thing is happening to Galbadia. How foolish of you, Deling...

Fury Caraway is a non-playable character in Final Fantasy VIII. The top military official in the Galbadian army, he is the husband of the late Julia Heartilly and the father of Rinoa Heartilly.

Caraway is a middle-aged man with graying black hair and stern features. He dresses in a black military uniform adorned with medals.

Fury Caraway is the very image of a military general. Loyal, strong-willed, and stern, Caraway bears the interests of Galbadia as a country in his heart and focuses his efforts of protecting its best interests, even if it meant crossing the country's President. However, he comes across as domineering and authoritarian, which drives a rift between himself and his daughter.

Despite Rinoa's joining a rebel group against Galbadia, Caraway still cares for his daughter. He never admits his feelings but attempts to protect her by locking her in the house to prevent her from engaging in a dangerous mission and bailing Rinoa out from D-District Prison.

By the time of the Sorceress War with Esthar Caraway had risen to the rank of general, and was stationed in Galbadia's capitol, Deling City, where he worked closely with Galbadian president Vinzer Deling to ensure Galbadia's victory over Esthar's leader, Sorceress Adel. During his visits to the Galbadia Hotel in Deling City, Caraway befriended the hotel's lounge pianist, 22-year-old Julia Heartilly. Julia went through a difficult time emotionally; she was in love with Galbadian soldier, Laguna Loire, who disappeared while on a mission in Centra. Julia turned to her friend, Caraway, for comfort, who helped bring her out of her despair, and encouraged her to pursue her dreams of becoming a singer and songwriter. Julia wrote her first song, "Eyes on Me," a romantic ballad about her lost love, that became a hit all over Galbadia.

Julia and Caraway married and built a life together in Deling City and had a daughter, Rinoa. Caraway advanced his position within the Galbadian military to become the head of military operations, while Julia continued to write and perform songs. Their happiness was shattered a few years later when Julia was killed in an automobile accident, leaving behind a shell-shocked husband and a five-year-old daughter.

After Julia's death, Rinoa and Caraway grew steadily apart. By the time she is seventeen Rinoa has moved away from home and had adopted her mother's maiden name, Heartilly, as her surname, likely as a way of symbolically severing herself from her father. To compound their problems, Rinoa joined the Forest Owls, a group of freedom fighters rebelling against the Galbadian government and its military. Engaging in covert operations to liberate territories overrun by Galbadia, Rinoa's chosen lifestyle is an insult to everything Caraway stood for.

Caraway had dedicated his life to serving Galbadia, and had thus always placed his trust in Galbadia's President Deling. Caraway begins to doubt the President has the country's best interests in heart as Deling falls under the influence of the enchanting Sorceress Edea, going so far as to appoint her the nation's official ambassador. Although Deling believes the sorceress would be the perfect tool for intimidating Galbadia's targets to submit to Galbadia's authority without having to fire a shot, Caraway is skeptical. Having lived through the Sorceress War against Adel, Caraway likely believes no sorceress would be satisfied with being subordinate to anyone.

Caraway masterminds a plot to assassinate her to rid the nation of the menace. Allying himself with Headmaster Martine of Galbadia Garden, Caraway calls upon several SeeD mercenaries to get the job done. The plan involves trapping the sorceress within the Deling City Gate during a parade celebrating her inauguration as Galbadian ambassador. Once caged within the gate, Irvine Kinneas, a sharpshooter, would fire the killing shot while Edea would be distracted. Edea publicly disposes of the president and takes his place as the ruler of Galbadia. The assassination plan fails when she deflects Kinneas's bullet and the SeeD group, accompanied by Rinoa, engage in direct combat, but are defeated.

After the assassination mission, Edea's sorceress' knight, Seifer Almasy, assumes the control of the Galbadian military, and General Caraway is dismissed. He remains at his mansion in Deling City, but uses his influence to free Rinoa from Galbadian captivity. 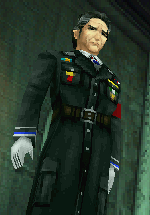 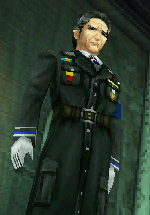 Caraway on PlayStation in Japanese (left) and overseas (right)

In the English language version, Caraway holds the rank of general, while in the original Japanese version, as well as the German, Italian and Spanish ones, he holds the rank of colonel (four military ranks below general). The reason for the change is unknown.

Caraway originally has a red armband in the Japanese versions, but this is changed to blue in overseas versions to avoid association with Nazi uniforms.[1] His outfit was also slightly more gray for the overseas PlayStation versions.

Caraway in the remastered version
Add a photo to this gallery