Fury is an optional boss in Final Fantasy XII. Along with Humbaba Mistant, it must be fought to unlock the battle with Chaos. Humorously, the scene before the battle begins with a massive Catoblepas that is killed by Fury.

It is also fought alongside the other dreamhare-type enemies in the Zodiac versions' Trial Mode in Stage 63 where the Cat-ear Hood can be rarely stolen from it.

Being a wrathful spirit in the body of a dreamhare living in the Necrohol of Nabudis, its astonishing power made all the more startling by its demure appearance.
None know the limits of its strength. Indeed, many are the great creatures of legend who have lost their lives to this furry terror.
As cruel as it is cute, it stalks the shadows, looking for worthy opponents against whom to test its mettle.

After depleting around half of its health, Fury will use Bacchus's Wine to go into a Berserk. It can be dispelled, but Fury will just keep drinking more. When berserked, it is faster and stronger. When in HP Critical, its Defense will rise and Fury will parry most of the party's attacks.

It is recommended to finish Fury off with a strong Quickening chain as it can deal over 4,000 damage per strike. Fury using Bacchus's Wine when dispelled can be its major flaw, as it will continue to try and use the wine on itself wasting time and allowing two of the party members to attack it while the third is on Dispel duty. A good time to cast Dispel would be when Fury is beginning to use Bacchus's Wine. Reddas can be a useful addition to the battle as he can be a third attacker when using the Dispel trick.

Because Fury parries a lot, using Mirror Mails and casting Blizzaga, Thundaga or Aeroga spells on allies helps end the battle quickly. The player can equip the party's heaviest hitter with the Cameo Belt to ensure 100% hits. If using elemental magick, equipping a weapon that boosts an element is a good idea.

Montblanc will give 2100 gil and a Bacchus's Wine for defeating the Fury.

Fury may allude to the Rabbit of Caerbannog in the film Monty Python and the Holy Grail. Both are mistaken as harmless due to their cute appearances, but both are bloodthirsty killers. It may also be a reference to the infamous "Jimmy Carter Rabbit Incident" in 1979, in which the former US president was attacked by a swamp rabbit while fishing. The incident became one of the most defining points of his presidency and was widely lampooned by the media. 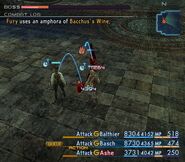 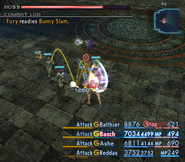 Trial Mode.
Add a photo to this gallery

Retrieved from "https://finalfantasy.fandom.com/wiki/Fury_(Final_Fantasy_XII)?oldid=3284469"
Community content is available under CC-BY-SA unless otherwise noted.