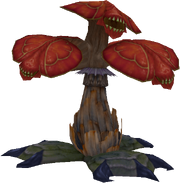 Fungus, also known as mushroom, is a fiend type in Final Fantasy X and Final Fantasy X-2. Most members of the fungi family are vulnerable to Fire, and in Final Fantasy X, they sometimes counter physical attacks with Pollen, which induces Sleep for three turns. Since they always attack with magic, this can prove dangerous.

Early on it would be best to have Lulu use Fire or Fira on them—the latter should guarantee a one-hit Overkill, depending on her Magic stat. Having Yuna summon Ifrit is also a plausible strategy, since aeons are immune to Sleep and he will absorb their Fire spells.

Fungi no loner counter with sleep-inducing Pollen, but they can inflict Confuse, which is arguably worse. Early on the simplest strategies are to use a Black Mage to cast Fire-elemental spells, or have a Warrior use Flametongue to take advantage of the elemental weakness.

Later, Yuna's Trainer dressphere can also exploit this. Since most players will not need these strategies by the time they get to Chapter 3 and 4, it might be best to simply attack with a physical-based dressphere.

It takes 12 kills to Oversoul a Fungus-type fiend. 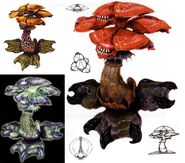